The thaw arrived just in time before the annual Farnham Runners Christmas Club Handicap and twenty-six members, all in fancy dress assembled at the Bourne Sports pavilion to be given their set off time. Although the roads were clear, icy conditions remaining in Dene Lane made the expected times even more difficult to reach.

Seemingly unhindered by his monk’s habit, Stefan Klincewicz (left below) put his meteoric improvement to good effect to clinch victory in this hard-fought contest for the coveted trophy. He was pushed right to the line by second placed Emma Doven (centre below), who was just six seconds adrift, with Nick Hitchcock (right below) only four seconds behind her. Starting eleven minutes after the first runners got away, Nick sped round the 4.25 mile course in 28 minutes 56 seconds to record the fastest time of the day. 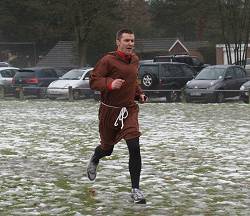 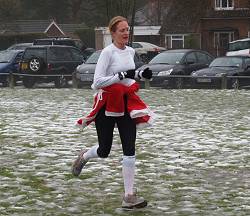 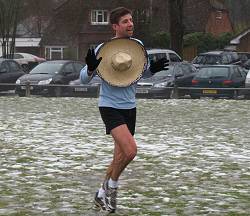 A number of battles went on as the next fourteen finished with in a minute of each other. Steve Murphy (appropriately attired as a Smurph), Mike Walberton and Martin Billett all clocked under 30 minutes while Gabi Hitchcock recorded the fastest ladies time of 31-04 with Emma Whittaker-Axon in 31-30 not far behind.

Scott Salmon in the guise of “Spirit of Christmases yet to come” took first fancy dress prize but would not recommend a mask for running. Paul Beesley had to adopt a new running style as his Christmas present costume hampered his arm movements but it helped him to second. The third placed Carleys – Wendy, Ian and daughter, Grace – apparently hadn’t had time to change after their spell in Mexico, though Ian disappointed by not serenading runners on his guitar on the way round. Many of the other costumes were highly commended and although some had a seasonal theme, they ranged from pirates to clowns to toy soldiers and bananas.

All finishers made a huge effort. In finish order:

Chairman Dan Smith also announced the winners of the three club London marathon places. These go to members who were rejected in the ballot but who have supported the club most in league races: Chris Cramp (14), Emma Drinkwater (7) and Peter Strange (6).

Home made mince pies were provided by social Secretary Sylvia Harper while secretary Julie Russ brought home made mulled wine to round off the festive event.