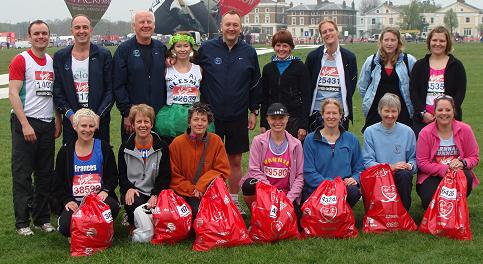 Twenty-six Farnham Runners joined the hordes of around 37,000 who pounded the streets of the capital to complete the 2010 London marathon. Though fairly warm and humid, conditions were generally good for the 30th staging of the event. Cheered by enthusiastic crowds all the way round the 26.2 miles, it was the Runners’ own club, family and friends supporters who spurred them on the most. Many were sponsored for charities and the total is estimated at an amazing £17,000.

Most have followed rigorous training schedules and achieved some enviable times, three of them under 3 hours.

In excellent form recently Michael Rix bravely fought off symptoms of a cold on the day and yet still he finished in an a superb time of 2 hours 40 minutes 27 seconds to place 186th. This is the second fastest time in the club’s history.

A beaming Ian Carley has also kept to a rigorous training schedule and so he fully deserved his splendid 2.52.11, a personal best time by three minutes to place 550th. James Ogilvie improved by an amazing sixteen minutes for an excellent 830th place in 2.57.04.

Several runners raised over a thousand pounds for charity, most notably Ali Lowes who is collecting around £3,000 for “BLESMA” – British Limbless Ex Service Men’s Association. She points out that they are sadly very much needed at the moment with the returning injured personnel from Afghanistan and Iraq.

Sally Lawrence even held a fun run to help her contribute £2,500 to the National Autistic Society.

Disability Challengers will benefit to the tune of £1,000 as a result of Shirley Perrett’s run, while Andrew Perrin matched this total for the Treolar Trust.

Dave Armstrong raised £800 for NSPCC’s Child’s Voice Appeal while Emma Doven and Fran Bills were each sponsored £750 for Help the Hospices and Disability Challengers respectively, Helen Cathie £650 for Breast Cancer, Paul Robins £500 for the British Heart Foundation and Nick King £500 for Bowel Cancer.

Several runners achieved excellent results as they took on the challenging distance for the first time. Dave Armstrong enjoyed the atmosphere and was driven on by supporters for his notable time of 4.01.53. Ali Lowes was deservedly pleased with her fine 4.09.34, Tracy McCombe, Nick Hulbert and Vanora Western with 4.18.16, 4.21.19 and 4. 22.01 respectively, while Lisa Smith was very satisfied to cross the finish line.

The previous week in very warm conditions and with some hills to contend with four members ran the inaugural Brighton marathon. In his 96th marathon (and due to complete his hundredth in Farnham’s September Pilgrim’s marathon) Hillary Carter led them in (3.57.41). It was James Finney’s first attempt at the distance and he clocked a very respectable 4.05.05and raised £500 for Cancer Research UK. Kim Mepsted was pleased with 4.27.30 while new member Paul Robins (5.43.15) used it as a training run before the London race.