Nine ladies and seven men from Farnham Runners contested the last of the Hampshire Road League races in the pleasant surroundings of the Royal Victoria Country Park, Netley near Southampton. With both their A teams battling to stay in the first Divisions, the men succeeded but the ladies lost out to keen competition this year. They are already planning their campaign for promotion next year!

Andy Eakins, returning to top form, ran an excellent thirty-six minutes 30 seconds over the course, which although mostly flat is not regarded as particularly fast. Striving hard to keep up with him Ian Carley clocked 36.49 while Charles Ashby paced well for 37.45. Tim Cummins came close to his personal best in 40.30 and was delighted to make the A team (7th) and help clinch a series result of 8th. The 10th placed B team headed by Bob Brimicombe (40.53) included Paul Beesley (41.44) and Tim Withers (48.35) giving a series ranking 7th of 15.

Five Farnham Runners are listed in the individual totals for the series with their best scores of any seven out of the eleven races to count.

Both men and ladies Farnham Runners teams were delighted to come away from the recent undulating Ropley 10km with third team prizes. Mike Smith led them in (40.43), followed by Scott Salmon (42.56), Mike Walberton (45.48) and Rob Murdoch (47.34).

On a warm evening twenty-eight members took part in the first of the 2010 Yateley 10km Road Races. Three were among the prizewinners while many also scored highly within their categories, many picking up their pace again after recent marathons.

A ladies’ club record was smashed by second claim member Claire Entwistle, who ran an awesome 34.56 among the elite ladies in the Manchester 10km.

Sarah Hill ran another splendid time of 3.03.26 in her second marathon in hot conditions in Prague. 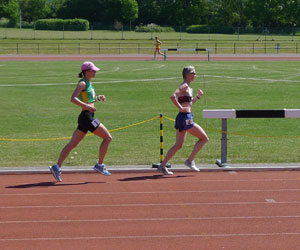 A lack of fellow competitors meant Jane Georghiou only had to battle against the high temperatures during the 25 laps of the British Masters 2010 10km Track Championship in Oxford to claim an age group gold medal with a time 44.33.