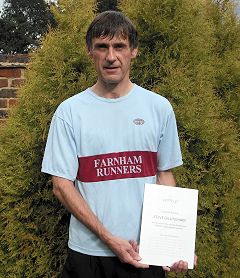 As well as taking part in three leagues and other local races members Farnham Runners are regular participants in the local “parkruns”. These are free, weekly, 5km timed open to everyone from those taking their first steps in running to those with more experience, free and easy to take part in.

At Basingstoke Steve Gillingham (see photo) topped the 2010 male points table after his success last year. He won by nearly 1000 points and was presented with a plaque of his times. He is now close to claiming his tee shirt for completing 100 parkruns, currently being on 97.

Previous points winner at Bushy Park, Mike Anderson now heads the table at the newer Frimley Lodge run by over 400 points. He has now completed a total of 149 parkruns.

Farnham Runners have also provided some winners of individual runs. Michael Rix has an impressive PB of 16-47 and four firsts at Frimley as well as three wins at the Brighton and Hove event.

Mike Anderson has crossed the line first at Frimley four times and even the more competitive Bushy Park once with 17-06. Ian Carley, now with a personal best of 17-28, has two victories at Basingstoke and one at Frimley to his credit, while Dan Smith has recorded one win and Jane Georghiou a first ladies’ place at Basingstoke.

In the overall age-graded performances (percentages of age group world record performances) Jane Georghiou is 1st at Basingstoke with 90.46% and 2nd with 87.97% at Frimley, where Mike Anderson is 3rd with 85.73%.

In the Gibbet Hill race, Haslemere, the Farnham ladies almost took a clean sweep of the trophies on this challenging unrelenting uphill then steep downhill multi-terrain course of approximately 10km. Sarah Hill won a convincing victory in an impressive time of 41minutes 21 seconds and was also first in the F35 category. Second lady was Gabi Hitchcock (45-12) who certainly proved that her recent training is paying dividends. Third for Farnham was Jane Georghiou (45-58, 4th lady), who took the F45 trophy.

These results boosted the mixed total of the quickest three ladies and four men for the Farnham club to claim first team prize.