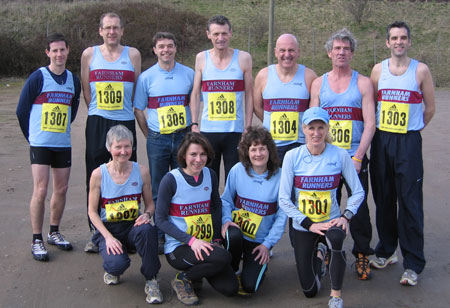 Farnham Runners, winners of the local area Today’s Runner Winter League cross-country series for the second consecutive year sent a team to the national final on the same day as twenty-six members tackled half marathons.

Travelling together to Burton-on-Trent by minibus, organised by mens’ captain Steve Kitney, some were apprehensive at representing their club in a national event but all enjoyed the day. Any idea that the course would be flat, in the valley of the River Trent, was soon dispelled as hills appeared on the walk to the start. The 5mile route was at least as challenging as any local Today’s Runner event as it was all ascent or descent, often single track and with mud after the previous days rain. Sections through saplings of the new National Forest and views over the Trent valley added to the appeal.

The fastest Farnham Runner in the day’s half marathons was Sarah Hill who come home at Fleet in a splendid 1hour 21minutes 18seconds, to finish 2nd lady and take over 5 minutes off the previous Farnham Runners ladies’ record for this distance. This was less than two weeks after she became Police Sport UK National cross-country ladies champion 2010, taking control from the gun over the 5.8mile course in South Wales.

At the Eastleigh 10k, a fast and flat Hampshire Road League race, both men and ladies put in full A and B teams to consolidate their positions in the top flight.

A beaming Ian Carley took 1 min 15seconds from his previous best for an excellent 35.44, to confirm that his rigorous training for the Virgin London marathon is paying off. Steve Gillingham underlined his present good form with 38.42. Tim Cummins (40.40) and Scott Salmon (41.48, PB) were delighted to make the A team.

For the ladies Jane Georghiou fought off a cold for 42.23 and first in age category. Emma Whittaker-Axon was pleased with her best for eight years (43.52), followed by Lindsay Bamford in 46.07 for an A team place of 6th.