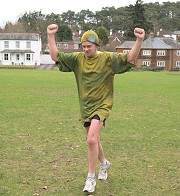 To help run off some excess Christmas calories Farnham Runners organised their annual Handicap race, a tradition started by founder members twenty-six years ago. Back then from a different venue the route was longer; the 4.25mile course was introduced in 1990 and, starting and finishing on the Bourne Green, has remained unchanged since.

Part of the challenge is the design of the costume and this is taken very seriously. The unwary find too late that their outfit is not best chosen for running. This year there were some dangerous characters let loose on the roads of the Bourne. Fortunately there was a doctor on hand to deal with any carnage caused by the Cereal Killer, the escaped prisoner and two pirates. Princess Leia, along with Neo and Trinity from the Matrix and a few of Santa’s helpers were there to ensure good triumphed over evil. Elvis graced the event with his presence but formed a dubious alliance with the prisoner.

A beaming Mark Beeson (photo top right) skipped round as an elf to appear unexpectedly early to take the trophy by almost a minute from his nearest rival, Abigail Ashby who showed her steady improvement since she joined the club. Emma Drinkwater in the guise of Abraham Lincoln strode in confidently for third place.

Julie Russ took on the difficult role of fancy dress judge. First prize deservedly went to Tori Shaw who showed her sewing talents with her hand made Ghost-Busters costume badges. Andrew Ellison, attired as “Alice Halt” complete with a “Halt” sign, made unsuccessful attempts to command the other runners to stop as he made his way round to claim second in the fancy dress competition. “Rastaman” Steve Murphy took third place.

“King Richard” Charles Ashby recorded the fastest time of the day (26-02), valiantly trying to secure first place in the club’s Grand Prix series this year after a string of second places. Alas for him it was not to be as there were just not quite enough men there for him to take the lead over Ian Carley whatever he did. Tango-man aka club chairman Steve Kitney was pitched against Mike Walberton for third and fourth GP places but just missed his target even though he clocked the second fastest of the day.

Laura Boon learnt from her experience of trying to run with a mouse’s head and will not repeat this mistake! Never-the-less she bounded round in an excellent time of 28-52. “Old lady” Gabi Hitchcock miraculously discarded her walking frame to finish with the second fastest lady’s time.

Youngster Mark Gillingham ran extremely well as a guest to complete the course in a very good time.

Chairman Steve Kitney also announced the winners of the three club Virgin London marathon places. These go to members who were rejected in the ballot but who have supported the club most in league races: Steve Murphy (19), Emma Doven (18) and Richard Sheppard (15).

Mulled wine and homemade mince pies were provided by social Secretary Sylvia Harper after the event.