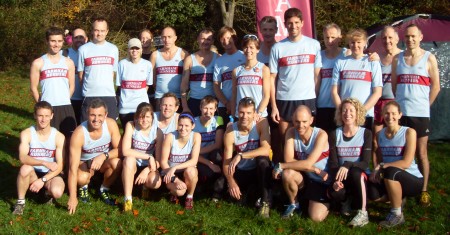 There were personal bests galore and some great Hampshire Road League team results for Farnham Runners at the Lordshill 10miler, followed by top place in the first of the Today’s Runner Winter League cross-country races at Queen Elizabeth Country Park (team photo above).

An impressive time of 1 hour 1 minute and 28 seconds from Ian Carley placed him 29th of 480 finishers and 7th in the M40 category at Lordshill. Next Jason East took 2 minutes off his previous best for 1-01-56. Charles Ashby, who has a string of recent personal bests, in 1-02-45 and Steve Kitney racing back to full fitness in 1-03-28 made up the A team that already look set for promotion back to Division One with a top place on the day and on aggregate after 4 races.

The A team ladies look safe back in the top flight this year, with an excellent 5th on the day and 7th on aggregate. Susie Chan made a huge contribution to the team with a superb 1-10-11 and a sprint finish in her first 10 mile race (16th lady of 177). Suzanne Munton took a huge 7 minutes from her PB with 1-15-31. Sue Boxall, after placing 4th, one second form 3rd in her age group in the Great South Run, recorded 1-16-10.

Queen Elizabeth Country Park provided the ideal setting on a sunny and unseasonably warm Autumn day for the first of the Today’s Runner Winter League cross-countries. Waiting for the results to be announced after the race was exciting for those who stayed after the lunch as they are announced in reverse order, incomplete teams first, 11th……. 6th… joint 4th…3rd… 2nd… still no Farnham Runners so we knew we were top! The men were 1st and ladies 3rd. The scoring team were the first five men and three ladies. Organisers Portsmouth Joggers were astounded by the numbers, with almost 400 taking part compared to the normal 300. No fewer than 34 made up the Farnham contingent.

Peter Strange flew the flag for Farnham in the New York Marathon with a fine 4 hours 39 minutes 42 seconds for a new age group club record.

Nicolette Overy was 2nd in her age group in the inaugural Plymouth 10km (49-17).