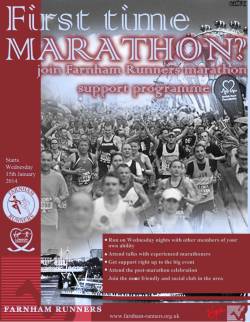 With so many people taking up the challenge of their first marathon this spring, Farnham Runners have created a support programme for those new to this ‘holy grail’ of distance running. Nicknamed the ‘London Marathon Virgins’, the course will be aimed at those competing in their first Virgin London Marathon on 22 April, 2012.

Whether gaining a place through the ballot or running for charity, many first timers have little idea of how to prepare themselves to achieve their best in the extremely challenging 26.2 mile event.

“Training schedules are all well and good, but what most people need is individual advice, help making their own training systems, and other friendly people to train with”,

The programme begins on Wednesday, January 18th, about three months before the big event itself. Participants will join the Farnham Runners at their clubhouse on Bourne Green for a run with one of the five ability groups, followed by a presentation on marathon preparation. Topics will include, training runs, injury prevention, nutrition and hydration, marathon pacing and logistical advice for the event.

As everyone has different abilities and goals, the biggest benefit is being able to run, chat and take advice from other club members. Runners will be able to join Farnham Runners for their regular Wednesday and Sunday runs, and by becoming full members of the club will be able to spice up their training with friendly cross-country races. Social events such as club suppers allow time to share experiences, have fun and take informal advice.

Two more formal presentations and workshops are on offer, first in early March as training is in full swing, and then about nine days before the London Marathon, as runners start to ‘taper’ and make final preparations for the big day. On the day of the event itself, London Marathon Virgins can join the rest of the Farnham Runners on their coach to go to the event. The following Wednesday, they can celebrate their achievements at the club’s post-marathon club supper with everyone proudly wearing their medals and t-shirts.

Unlike many training programmes, this one is free of charge! According to Ellison,

“Farnham Runners wants to support anyone attempting this enormous challenge, and hopefully they will also want to join the friendliest running club in the area”.