Home » All press releases » 2013 London Marathon and the Brighton Marathon 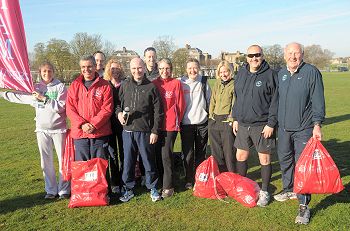 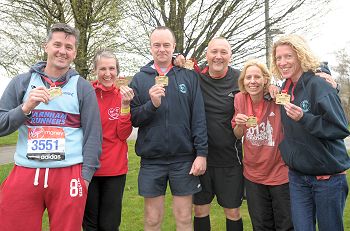 In London, wearing the black ribbons in commemoration of the recent tragedy at the Boston marathon, they were determined to put any safety worries aside and join over 34,000 others who proudly crossed the finish line. The arduous preparations to run this gruelling distance started a few months ago for most of the runners and, tired but happy, they will by now be enjoying a very well deserved rest. Whatever their pace or time they commented on the value of the huge encouragement from the crowd, especially from friends, relatives and fellow club members. 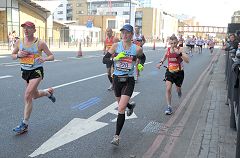 Echoing Paula Radcliffe’s win of 2003 when she beat all the British men, Sarah Hill flew round for a new personal best and ladies’ club record for an astounding time of 2 hours 52 minutes 57 seconds, well ahead of any of the Farnham Runners men this year! She was 20th lady and 4th in the W40 category.

“The crowd support was amazing”

With a couple of the men who had entered very disappointed to be injured or ill, it was up to Michael Rix to lead them in. Unable to train as before and making this his 10th and last marathon he had no chance or repeating his best time of 2 hours 40 mins, but still clocked a very commendable 3-11-00. Next Stuart Williamson ran an impressive 3-32-49 on his debut marathon, having joined the club’s “Marathon Beginner Training” taken by experienced runner Andrew Ellison. 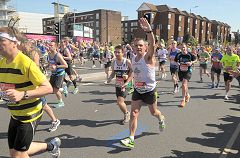 Martin Billett recorded a superb 3-43-39 in spite of battling double Achilles tendinitis since December. He was on course for the planned 3.30 time up to 23 miles before literally running himself into the ground, and, needing treatment for heat exhaustion after the race, achieving a finish only 4 mins outside his PB. He has raised £2,000 this year and a sensational £10,000 over the last three years for Cherry Trees respite care home and The National Autistic Society.

He was spurred on to the end by Stephen Nicholls (3-44-21) who ran alongside him after only limited training. Dressed in a “Go Faster” blue tutu, Ruseel Wheeler was delighted with a new personal best of 3-51-01 by six minutes.

Lucy Enstock made excellent use of the “Beginner Training” to move through the field towards the finish for a fine 3-51-16, surpassing her target of four hours. She has raised over £1,000 for Arthritis and Alzheimer’s Research.

Tori Shaw, collecting for RNLI Lifeboats, settled for 4-10-42 after less than ideal preparation this year.

Becky Martin with a time of 4-11-00 was delighted with an improvement of 6 minutes compared to her time 12 years ago. She was sponsored for Parkinson’s UK to the tune of £700.

Emma Drinkwater took an even greater chunk away with a best by 14 minutes (4-16-33) and raised funds for Plan International that works in 50 countries to promote child rights and lift millions of children out of poverty.

Another “ Beginner” Karen Higgins (5-24-54) enjoyed the challenge of the distance and says it was worth every minute. The charities “Wooden Spoon” for disadvantaged children and The Huntington Disease Association will both benefit by £2,000 as a result of her run. 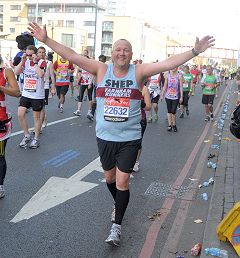 Vikki Roberts had a fantastic day and on track for 5 hours until mile 19 when she had to walk and, with great crowd support, she crossed the line in 6-02-44. She has made this race part of a series of challenges for which she is collecting over £1,500 for the Scleroderma Society.