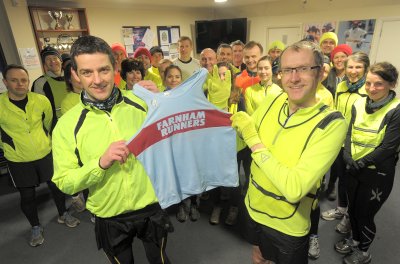 The club’s newest member Stuart had been spurred on by a friend to get fit in 2010 and was running by himself when he found he’d got a place in this year’s London Marathon. Keen to find support and like-minded people to train with, Stuart joined Farnham Runners. It seems Stuart’s love of running has only grown stronger as wherever he goes he takes his running gear – even to his mother-in-law’s 60th birthday!

Established in 1984, Farnham Runners was formed after a small group of runners started to train for the then newly established Farnham Half Marathon under the eye of Irish international Mick Woods. Going from strength to strength, numbers have steadily increased, almost doubling since 2005.

Based at the Bourne Green clubhouse, and often spied running around Farnham town centre on a Wednesday night, club members have a wide range of interests, abilities and aspirations – from competing in two local leagues – Today’s Runner Cross Country League and the Hampshire Road Race League, to enjoying a leisurely run round the Bourne Woods on a Sunday morning.

The club also hosts the annual Alice Holt races in September as well as a fancy dress club handicap and competing in local and not so local races. Chairman Steve Kitney said

“We are lucky to be a busy club with lots of enthusiastic members. With the Olympic legacy, we’ve seen a real surge in people interested in running and that’s reflected in having our 200th member join the club. We hope Stuart will find the friendly faces at Farnham Runners good running companions.”

More recently, Farnham Runners have offered a 12 week ‘Absolute Beginners‘ course run by ‘Run Leaders’ from within the club, designed to get anyone who hasn’t run before to a 5k distance. Organiser Ian Carley says the course has been “hugely successful with last years recruits even entered into marathons this year!” The 2013 Absolute Beginners course is planned for March for this year.