With all the recent flooding it was perhaps inevitable that many of the fancy dress outfits at the Farnham Runners annual Club Handicap race had an aquatic theme. There was a usual mixture of menacing characters balanced by forces for good.

Naval Captain Ian George remained calmly in control when faced by no fewer than four pirates. Surfer Richard Sheppard carried on unperturbed by the potential conflict. Spiderman (Craig Tate-Grimes) and monk (Matt Dellar) kept tabs on the evil pikachu mouse like character (Charlotte Hanson), capable of sudden lightning attacks, whose tail was not best suited for running. Hippie Steve Murphy made use of his wig collection, spreading vibes of peace.

However, winner of the fancy dress competition for her original idea was Jacqueline Ashley-Collins who dressed as a bunch of grapes. A trio of three pirates from the Carley family came next, while Schoolgirl Emma Doven took third.

Never the less some serious running was done over the 4.25mile route, with everyone encouraged to do their best, as all had an equal chance of winning the treasured trophy.

New member Vicki Clarke was delighted by her victory – and by achieving the second fastest ladies’ time on the day. She had to sprint to the line as just five seconds behind her came Steve Murphy. Hot on his heels was Ian Carley, who posted the fastest time, with Matt Brown next as second fastest. Tim Cummins showed his present excellent form in fifth place, followed by fastest lady, Charlotte Hanson, then Alistair Hardaway, Craig Tate-Grimes and Steve Kitney who all ran well. 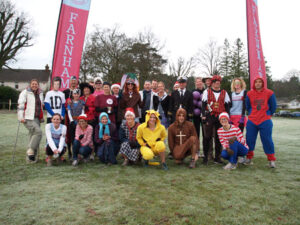 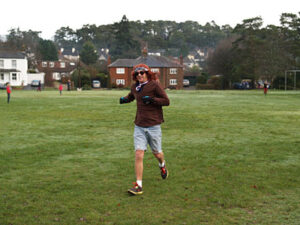 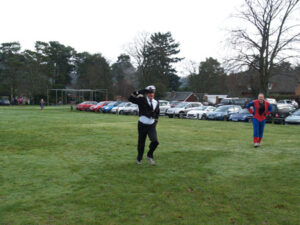 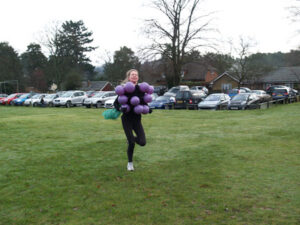 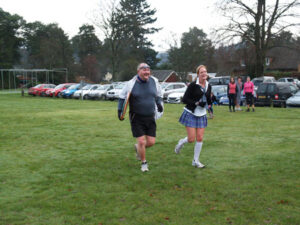