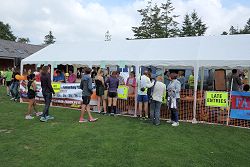 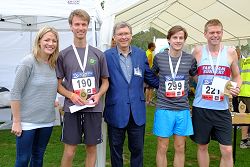 The 20th Anniversary of Farnham Runners 10km race in Alice Holt Forest was billed a huge success. Started in 1994, under the long term directorship of Charles Ashby the event has grown to include 5km, 3km, 1km and even an under 5’s “Dash”. This year Craig Tate-Grimes bravely stepped in to take over as race director and all agreed he has done a truly splendid job.

The races could not go ahead without sponsors and Farnham Runners are indebted to the main sponsors, local Andrew Lodge Estate agents and Whiteoaks Consultancy, as well the running shop, Sweatshop and to Stoke Fitness. A huge turn-out of Farnham Runners, their relatives and friends, to help with all the myriad of tasks to be done before and after the race helped the day run smoothly. St John Ambulance were in attendance in case of any medical problems but happily there were none! Commemorative 20th Anniversary T-shirts, designed by club member Ian Carley were on sale. The weather was ideal for a day in the open air, though on the warm side for running. The Running Clinic from Farnham were on hand for pre and post-race massages, while a tea and cake stand raised funds for CSSEF, a local charity aiming to improve the education of deaf children in mainstream schools by providing equipment, resources and materials. Said founder Karen Jackson, “This money will provide 100 deaf awareness books to schools in Surrey and Hampshire.”

Farnham Runners chairman, Richard Sheppard, ably took on the role of commentator for the day, at times injecting humour into the proceedings!

While most of the runners were local a few were registered with clubs as far afield as Orpington, Glasgow, and even Norway! Stoke Fitness provided a very useful warm-up session before the races.

Andrew Lodge presented the 10km prizes and Suzanne Griffiths, managing director of Whiteoaks Consultancy gave out the 5km awards. At the front there were some strong competitors, yet the day still provided an ideal start for those new to racing. Farnham Runners won three of the team awards, the fourth going to Aldershot, Farnham and District A.C. (AFD).

A clear winner of the 10km race was Dominic Smith who came home over 90 secs ahead of the next runner in an impressive time of 36 minutes 11 seconds over the challenging course. Previously in a University Athletics club he will look to join a new club once he has moved from this area, he said. Runner up was Farnham Runners’ James Clarke in 37:49 and a minute later in 38:50, Fleet and Crookham A.C’s Ben Raggett, who also took the first M40 place. Second in that category was fourth placed Tom Frost from Liss Runners in 39:02. On his heels was first M50 Steve Low from Blackwater Valley Runners in 39:02, while Farnham’s Stuart Morel was 3rd M40 in 39:52.

High in National Rankings local Under 15 runner Harry Boyd of Guildford and Godalming A.C. showed his class in the 5km race, first to cross the line in an amazing 17:58, but he was surprised to be pushed every step of the way by Farnham Runners’ star runner Sarah Hill who clocked exactly the same time as last year in 18:02 (first senior lady). Third and fourth to finish were Michael Try (18:56, AFD) and James Fleming (19:15, Camberley and District A.C.)

There was a superb performance and a new course record from AFD member Luke Van Oudtshoorn in the 9-12 year olds’ 3k, his time an astounding 10:43. Team-mate Daniel Weston (11.52) and Richard Sutton (11.56, BMHAC) also recorded under twelve minutes. In eighth place overall, Phoebe Smith led in the girls in 12:56, followed by Florence Hancock (13:56) and Anna Buckmaster of AFD in 13:55.

The boys were beaten in the 1km for 5-8 year olds, as first to appear at the line in was Katie Roberts in only 5:14. Many in exciting sprint finishes included Oscar Taylor who just squeezed ahead of Billy Sheppard, both given 5:19. Thomas Buckmaster got the better of Joshua Boxell for third boy’s place, both in 5:21. Alice Hawkins sixth overall was second girl in 5.28 while seventh placed Amelia Boxell was third in 5:31. Further back one young lady carried her toy squirrel, Samson to compete in his first race.

Patiently waiting their turn were the under fives, some as young as 18 months, who proudly sported race numbers as they lined up for the last event of the day – a “Dash” of some 60 meters. Those who made the finish first were determined from the start and did not deviate from their line, but all were winners, rewarded with a medal and sweets.