Conditions were good for 24th Farnham Runners Club Championship, first held over the same challenging hilly route in 1991. Forty-three members took part in the main multi terrain event of approximately 10km, while most of the “Absolute Beginners” who started running with the club in April completed a 5km run (see report below).

There was fierce competition for some of the ten age category trophies up for grabs. Ten of the men finished in under 40 minutes. 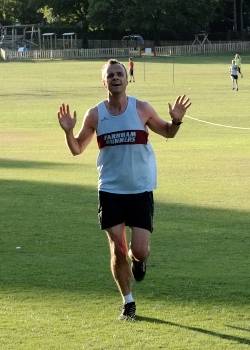 A beaming men’s captain James Warren (above) forged ahead for an early lead after being among the front pack for the first half mile. He was crowned men’s champion for 2014and took first in the M40 category, with an impressive time of 36 minutes 39 seconds. 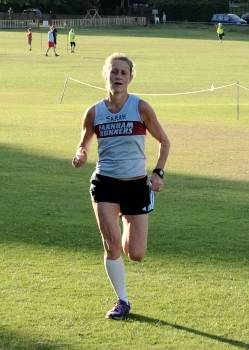 The amazing Sarah Hill (above) was not far behind him in 36-56 to claim yet another ladies’ course record, deducting 35 seconds for her time last year and taking the first F35 shield.

There was a surprise entrant in the M50 category. After lapsing his membership for a number of years Stuart Morgan rejoined in time to be eligible to take part and was just 17 seconds short of clocking a new M50 record with 39-49. The other serious and disappointed contenders were Colin Addison (40-54), Mike Walberton (41-19) and Steve Murphy (42-45).

Terry Steadman was the expected and worthy winner of the M60 shield (46-05).

*Jane Mezzullo took part in the local overnight hilly Brutal Enduro the previous weekend, and managed six laps of a 10km route (60km) within 9hrs. She was delighted to come 3rd out of 12 in the women’s solo category.

New chairman Richard Sheppard presented the awards and thanked everyone who had made the event successful including the race directors, Craig Tate-Grimes and Cyra Parkes, timekeepers and marshals as well as the social secretary, Christy Roxburgh and her team who helped to provide a splendid spread to accompany the BBQ.

The Absolute Beginners course has now concluded. Of over 25 new recruits, some were completely new beginners and some were returners to running. The age range spanned from 16 to 71 and everyone was able to progress at their own pace.

“Even though this course has officially ended, we are still running as a group and meet on Mondays and Wednesdays. Due to the enormous support we had from existing club members we were able to split the group into, short, medium and long runs. Everyone made their choice as they went along depending on how they were feeling that day, but everyone at some stage covered at least 5k, slowing down and/or walking up hills when they got tired.

As the course progressed new people joined in along the way and we will continue to encourage anyone who doesn’t feel up to the 5 mile runs on a Wednesday to join us and bring up their fitness and stamina to join in any of the groups currently established at the club.

If you are returning to running or an absolute beginner, come and meet us, we can help you with a program so you get to the stage where you can join in with whichever group you are aiming for.”