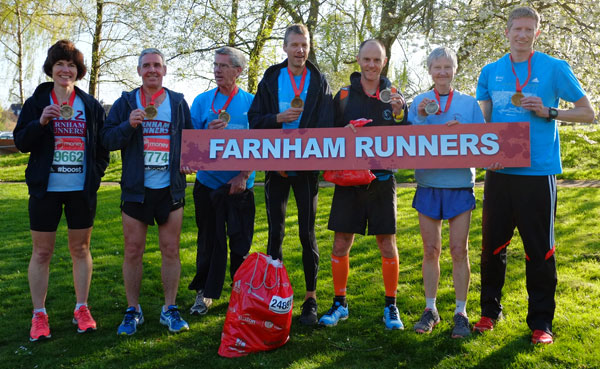 In London a very enthusiastic group of members, friends and family joined record crowds of three quarters of a million to spur on their team. They enjoyed soaking up the unique atmosphere of the event and their support was very much appreciated by the runners. Some 36,000 crossed the finish line, fifteen of them from the local club, with a wide range of targets between them. Conditions were warmer than ideal for running and but many were pleased with their performances.

First back for Farnham was, as in 2013, the talented Sarah Hill whose 2hours 58minutes 6 seconds placed her as 46th lady and 6th in the ladies veteran category. She was disappointed with this performance that few can dream of!

Seasoned sub 3 hour marathoners, Ian Carley and Jason East, ran together in the final stages and had to settle for 3:13:55 and 3:14:17 respectively.

“The wheels, axle and engine fell off after a good 14 miles” mused Jason.

There were several tackling the gruelling distance for the first time, among them Mark Maxwell, who was really happy with his time of 3:16:29.

“It was a great first marathon experience and I will do another one hopefully in the not too distant future. I ran for Centrepoint, the UK’s leading charity for homeless young people, and so far have raised £1,850, with maybe more coming through in the next week or so!”

Then, just behind, Mike Walberton was back after injury with a commendable 3:16:58.

Another first timer, Will Paskell reported: “ I was comfortable for 20 miles and then hung on. Happy with 3:30.20 for first attempt, think I might have caught the marathon bug though!” His sponsor money of £1250 will go to PACT- Parents and Children Together.

Another under four hours was Neil Griffiths, who ran in 3:58:11, a personal best time by nine minutes. He raised £1,300 for Back Care.

The tantalising 4-hour target still escaped Alistair Wilson in his 8th marathon, though his time of 4:01:41 drew him another 2 minutes closer. His sponsorship of £600 will go to Christopher’s Smile.

A smiling Paul Mackie ran his second marathon in two weeks, after his debut at Brighton! He still managed 4:15: 56 and will no doubt be enjoying a well-deserved rest now.

Jessica Page, in Brighton to support the team, was pleased to take part herself in London and finished in 4:22:36.

Unstoppable ultra distance runner Susie Chan, back in 4:37:31, used the event as a training run before planning to tackle the Boston marathon the following week and the Thames Towpath 100, a 100-mile non-stop race 11 days later! She is collecting £1500 local charity Disability Challengers.

Last but not least. Theresa Hare was delighted to take part, her longest previous race being the Alice Holt 10km.

“I ran for the local charity Cssef (Chloe and Sophie’s Special Ears Fund) and raised £210 for a hearing aid for a young child and, along with the other Cssef runner, raised enough for her parents to buy it. I am so proud to have achieved my medal – it was an amazing day, I can’t wait to go it again and hopefully significantly improve my time“