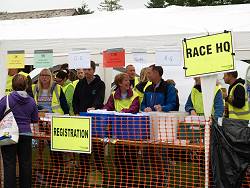 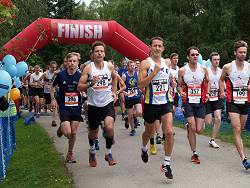 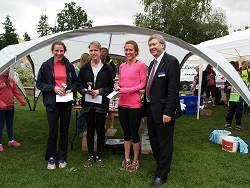 Ideal running weather helped the runners in the Alice Holt Races to some fast times. Staged by Farnham Runners under the directorship of Craig Tate-Grimes hordes of members, friends and supporters turned out to help out on this family day out in the forest. As well as the 10km which first took place in 1994, there are now 5km and junior 3km and 1km races, first introduced by previous race director Charles Ashby in 2007. The event is keenly supported by local sponsors, Andrew Lodge estate agents, Whiteoaks consultancy and “Fit to the Bone”. Local charity the “Hedgehogs” manned the car park, St John Ambulance were in attendance and Farnham Weyside Rotary club took charge of the baggage tent. Many competitors spoke highly of the organisation, marshalling and convivial atmosphere, which helped to make the event enjoyable for all ages.

Most entrants were local but some came from far afield with one lady from Florida! “I was encouraged by the number of entries” said Craig Tate-Grimes, “in fact, we almost reached the limit that we could accommodate.”

Grant Walters of Andrew Lodge estate agents started them off and Andrew Lodge himself presented the 10km, 3km and 1km prizes. Krista le Beau from Whiteoaks gave out the 5km awards. “Fit to the Bone” provided a lively warm up session for all the races.

Richard Sheppard took on the commentator’s role, spurring on all the runners to the finish line. Most of the prize winners were from the local area in and around Farnham.

Haslemere Border AC runner Luke Shearring won the 10km race in a splendid time of 35 minutes 43seconds, six minutes faster than his time two years ago! Next Scott Kennedy in 36:07 led Blackwater Valley Runners to victory in the team event. Fleet and Crookham A.C’s Ben Raggett, repeated his third place and first in the M40 category from last year with an improved time of 37:21.

Fourth to cross the line was Simon Cooper (Blackwater Valley) in 37:23 (2nd M40), followed by Mark Trueman in 37:49 for 5th place. Third M40 was a beaming Stuart Morel of Farnham Runners in 38:07. Steve Low of Blackwater Valley posted an impressive 38:54 to take first in the M50s, while local runner Jonathan Clare won the M60s in 42:36 and long-standing member Allan Bird took the M70s with 63:43. Alex Radford was the fourth member for team winners Blackwater Valley.

Nationally ranked Harry Boyd of Guildford and Godalming A.C repeated his victory of last year in the 5km race with a time 17 minutes 53 seconds. Next came Haslemere Border AC’s Lawrence Hollom in 18:16 for the top senior prize. Farnham Runners’ Richard Lovejoy included it in his marathon training for third in 18:30, while Luke Van Oudtshoorn who won the 3km last year took the second junior slot in 19:00.

Junior Guildford and Godalming A.C. member Charlotte Griffiths enjoyed the 5km in a superb 20:34, with second lady, Farnham Runner Susie Chan in 21:16. Next came junior from AFD, Isobel Cahill (22:33) while Natasha Mwaegbe as 7th lady was second in the senior category (23:50).

Potential athletes of the future recorded some fast times in the 3km (for 5-8 year olds) and 1km ( for 9-12 year olds) with local families, the Roseveares and Norwoods, prominent in the results. An impressive winner of the 3km was Harry Hyde who clocked 11:26, followed by Jacob Roseveare in 12:46 and Thomas Campbell third in 12:55. Tiffany Read of Haslemere Border AC was first girl in 13:32, second was AFD member Amelie Roseveare in 14:18 and third was Isabella Croucher in 14:34.

Robin Simons in 5:18 and Sophie Croucher in 5:32 finished as second and third girls of the thirty three who took part.