Home » All press releases » HRRL Solent Half Marathon and other races

HRRL Solent Half Marathon and other races

Keen to make the most of the Indian summer weather, without a cloud in the sky, eighteen Farnham Runners travelled to the coast for the second Hampshire Road Race League event, the Solent Half marathon, organised by Hardley Runners.

None of them though could catch Farnham’s star lady, Sarah Hill, who won the lady’s race by over one minute, her time a superb 1 hour 21 minutes 38 seconds, giving her 18th place overall. This came after her impressive win by half an hour and third place overall in the recent Farnham Pilgrim’s marathon in 3:11:53.

After Sarah Hill’s boost to the team, Eloise Stradling was next in 1:45:41, while Tina Harrison (1:57:26) was pleased to make the A team that placed a very worthwhile 5th of the 10 in Division One. Mary Denise Fitzgerald (2:07:02) was disappointed to have no support for a B team. 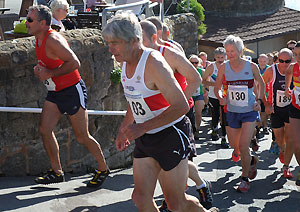 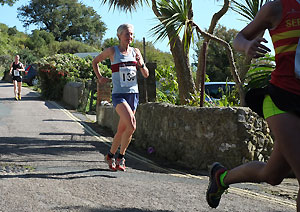 Jane Georghiou came back from the Isle of Wight with the South of England A.A. Rell Running Championship 2015 gold medal for her age group after completing the series of three races over the weekend, totalling approx. 36km and 1,200m ascent (4,000 ft).

Club members came back with a haul of six trophies from the Alton Downland Challenge 10km, organised by Alton Runners and Alton Lions. Charlotte Hanson was first lady and first senior lady, and Mike Anderson was third overall and first M50. Kay Copeland was first in her category, while Kayleigh Copeland and Terry Copeland were third in theirs.

On the same day Ian Carley and Jason East were 5th and 6th in the Rushmoor Wellesley 10k, Martin Billett was 4th M50 and Alice Healy clocked a new PB as third senior lady.