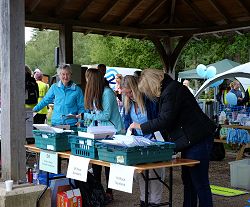 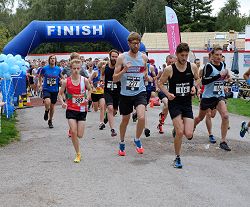 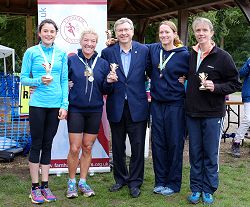 Almost four hundred aged from 5 to over 70 converged on Alice Holt Forest for the popular family races staged by Farnham Runners. Craig Tate-Grimes again took on the huge responsibility and work load of race director, this year ably assisted by Cyra Parkes, Jacquie Browne and Kathy Brown. “Without the help of these three, the races could not have gone ahead”, he acknowledged. Countless other members, friends and relations gave up their time to ensure that the day went off without a hitch. Chairman Richard Sheppard thanked everyone who had helped, in any way. “I hope everyone enjoyed the day!”, he added. Indeed many finishers commented on how well organised and friendly it all was.

Many local clubs and their families supported the races and featured strongly in the results. At the front the competition is fierce but all standards push to achieve their best, whatever their goal. Andrew Lodge presented the prizes for the 10Km and 5km, while Debbie Flanders of Grant and Co hairdressers presented the awards for the juniors’ 3km and 1km.

Local Sandra Norwood repeated her success of last year to lead in the ladies with an improved time of 42:14 and take the F35 ladies’ prize. Second lady Sally Goble (44:41, Haslemere Border A.C.) was first in the F45 category, with third and fourth ladies from the same club of F35 status, Sofia Shearring (45:09) and Donna Read (45:13). Jemma Zakariyyau was first senior (47:20) while Farnham Runners’ Linda Tyler clocked 49:42 for first F55. Sue Jones (52:44) and Sarah Jayne Baker (57:40, Blackwater Valley Runners) were second and third seniors.

Farnham Runners men were delighted to win the team trophies. After Richard Lovejoy’s lead the rest of the team could not have been much more close-packed, their times from the gun: Ian Carley 39:13, Rob Gilchrist 39:14 and Andrew Ellison 39:15. As second, third and fourth, Haslemere Border A.C. just needed the back up of Lucy Pennant (1:01:33) for ladies’ team victory.

The 5km event attracts many keen local juniors for the under 16 category, with all above this age classed as “seniors”. Joe Blacknell from Aldershot, Farnham and District A.C. won by a huge margin of two minutes in a superb time of 17:23. Next, Jack Pearson showed huge potential in his first race (19.22). In fourth place overall and first senior came Farnham Runners’ Mike Walberton in 20:03, followed by second senior, Joe’s brother, Tom Blacknell in 21:56 (6th).

Some impressive times were recorded in the youngsters’ 3km and 1 km races, particularly among the prizewinners, whose times are shown in the tables below: