Home » All press releases » 2016 Club Championship and other recent races

2016 Club Championship and other recent races 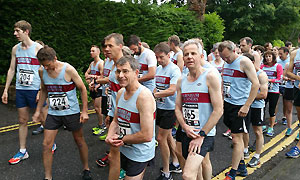 The forecast of light rain didn’t dampen the spirits of Farnham Runners at their annual Club Championship.

Sixty members completed the traditional challenging hilly mixed road and off road route of almost 10km while thirteen ran the 5km route. Eight of the “Absolute Beginners” who started training with the club in April chose the 10km.

Expertly organised by race director Craig Tate-Grimes assisted by Cyra Parkes, the race could not have gone ahead without numerous volunteers, who gave up their time and chance of running to help stage the event.

Apart from the overall men’s and ladies’ Champions trophies, the age group shields were also keenly contested with many previous winners taking part.

Richard Lovejoy clinched a comfortable victory overall in an impressive time of 35 minutes 49 seconds. Senior winner in 2013, he deducted almost two minutes from this previous best. Also in the senior category, next Charlie Hill-Venning put in a strong performance for 37:40. Three-time overall winner Ian Carley added 2016 to his tally of five previous M40 wins with an excellent 37:50, as third senior James Clarke came just three seconds back in 37:53.

Before presenting the 10k trophies, chairman Richard Sheppard thanked all those who made the evening a success, including social secretary Jacquie Browne who organised the very popular hog roast.

Other 10km times and awards

Co-ordinator of the “Absolute Beginners” this year, Peter Strange presented medals to all those who had completed the course, as well as some special awards:-

Susie Chan came an awe-inspiring third lady in the incredibly challenging 230km Jungle Ultra in Peru, organised by “Beyond the Ultimate”.