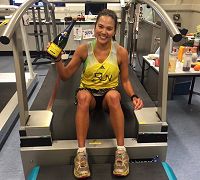 During the challenge, a live stream beamed on YouTube had more than 3,000 views, while hundreds of messages of support, some from Farnham Runners, tweeted to Chan using the hashtag #susieWRrun were projected on to a screen in front of the treadmill to give her an extra boost. One of the first to congratulate the ultra runner on her achievement was British ladies’ marathon world record holder Paula Radcliffe, who tweeted:

“I’ve never watched someone run on a treadmill on my computer until now – @Susie__Chan you got me! Congrats on your new world record!”

After celebrating her treadmill triumph with friends and family, Chan spoke of a “wonderful sense of achievement” and paid tribute to everyone who had been behind her.

“I’m feeling absolutely exhausted but elated – the support made such a huge difference,” the mother-of-one, who only took up running five years ago when she completed the Farnham Pilgrims’ half-marathon with her brother, said. “I would never have got there were it not for the team at Kingston University – I couldn’t let them down. Everyone was really wonderful. Thank you to everyone who came to see me and sent me messages and to my husband Shaun; if he wasn’t there it would have been a lot harder.”

The record attempt was supervised by senior lecturer in health, exercise and physiology Dr Hannah Moir and technician and PhD researcher Chris Howe, along with a team of 10 sport science and nutrition students acting as timekeepers and witnesses.

To receive official verification, the team had to put various measures in place on the day.

“Anybody can say they’re run the distance on a treadmill. For it to count we had to provide footage of the whole thing to the Guinness World Records,”

‘We had it live on YouTube but annoyingly it only streams for six hours, so we had to stop and restart and that probably won’t count. Luckily we also had two Go Pros on the go and a video camera.”

Susie and the team are still waiting for official verification.

“We had to get so much stuff together; there’s nothing we haven’t covered. But hopefully soon I’ll get a certificate to take home and show my mum and dad!”

Although Chan certainly achieved her objective, the day was not without its challenges.

“The wall was less than two metres away. I find running 70 miles outside much easier because you’re looking around. Try and do anything for 12 hours while staring at a wall, it doesn’t matter what it is, it’s hard!

I’ve run for 100 miles non stop, the longest stage of the Marathon des Sables was quite tough, and Ironman wasn’t really my bag because I don’t like cycling, but Saturday was honestly the hardest thing I have ever done in my life.

I think retrospectively, the pressure got to me. I didn’t expect that many people to be that engaged with it. It was fantastic but I was worried about letting everyone down; especially the university and all the people who had given up their time.”

It was as much a mental as a physical challenge for Chan.

“‘I wouldn’t have done it if I didn’t know I could, but when I realised I wasn’t going to get to 70 miles it started to play with my mind,’ Chan explained. ‘As every runner knows, when you have a race that’s not going your way it can be hard to get out of that headspace. But so many people came in and I had so many messages that were so encouraging, it really did help!”

With little time for recovery she was whisked up to Manchester to appear early the next morning, along with Christopher Howe of Kingston University, on BBC Breakfast TV.

“I’m going to do the 50-mile grand slams Centurion races, then the Jungle Ultra, which I’m a bit worried about because I don’t like spiders. I would do something crazy again, but next time I’m in the gym I will be giving the treadmill a swerve.”