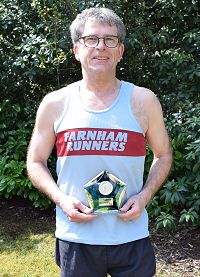 Farnham Runner Michael Walberton has finished the 2015-2016 Rushmoor Parkrun season in top position with a record tally of 4,120 points in the men’s table. Parkrun is a free 5km run taking place every Saturday morning at parks throughout the county and the Rushmoor event has now completed its second year with over 2,000 runners participating during the course of the season.

Walberton (running in the M 55-60 age group) becomes the fourth Farnham Runner to top an annual Parkrun league, completing 45 of this season’s 51 runs and comments

“runners of my vintage don’t win very much so I was surprised and delighted with this year’s result, Parkrun is a terrific event for runners of all ages and abilities.” 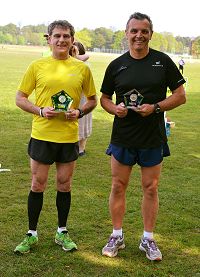 It was a double success for Farnham Runners as teammate, Martin Billett, in the same category, was equally delighted to take second place with 3404 points and they were both presented with trophies at the event.

“We encouraged each other to turn out most Saturday mornings in all weathers to take part. It shows the value of having a “running buddy” to get you out of the door each time”

Both have achieved high “age grading” percentages, which are based on world records for each age group. Walberton’s best time of 19:00 minutes gave him 81.58%, with 80% generally being recognised as national standard. Billett’s best of 19:58 puts him not far back with 78:30%

A number of other Farnham Runners did well at Rushmoor including Jason East (11th), and Scott Salmon (14th). Walberton will now be stepping up the distance for next year’s London Marathon.