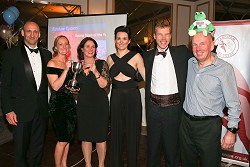 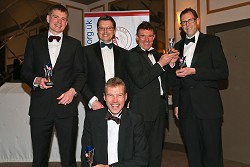 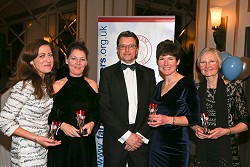 A highlight in the Farnham Runners’ calendar is the Awards Dinner to celebrate the club’s and individual achievements over the past twelve months. Over 100 members, relations and friends gathered at the Hog’s Back hotel for the event, organised by social secretary Jacquie Browne. Chairman Richard Sheppard outlined the successes of 2016 and congratulated all the award winners in an entertaining presentation, illustrated by numerous slides prepared by Ian Carley. 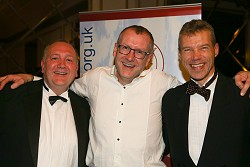 This year for the first time, a “Lifetime Service Award” was made to a past chairman of the club, Steve Kitney (photo above), who had also served as Men’s captain and treasurer during a nine year stint on the committee. He was thanked for his long-time dedication to the club and was presented with a stone birdbath for the garden at his new home.

The prestigious Steve Parker Award for the person who has done most for the club during 2016 went by an overwhelming committee vote to Jacquie Browne for her huge and varied contribution to the club, including in her role as social secretary and also in organising the Absolute Beginners group. 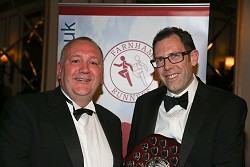 The Chairman’s Award for an individual who has embraced the enjoyment of running, and has made tremendous personal progress this year went to Neil Ambrose (photo above), who joined the club as an Absolute Beginner less than four years ago. He was also presented with an award for the most personal best times in the Hampshire Road Races (5), while Tina Harrison took the award for the ladies, her 6 PBs all the more impressive after she clocked up 5 last year.

Sarah Hill won the Jane Georghiou ladies’ marathon trophy for the sixth consecutive time for her 2:55:50 in the London marathon, the best overall Farnham Runners time for 2016. Rob Gilchrist took the men’s Paul Charlton Memorial trophy for his 2:56:56, again in London. 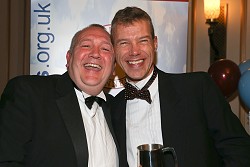 Ian Carley (photo above) was surprised to win the Herbie Memorial trophy for improvement (by 1 minute 40 seconds) in the Alice Holt 10km between 2015 and 2016, while Barney Whiter took the Club Handicap trophy. 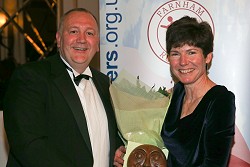 The unique “Smiley” made by former chairman Andy Smith went to Lindsay Bamford (photo above) for her unwavering cheerful attitude and reliability while helping the club in a wide range of roles, including coaching the Beginners group. 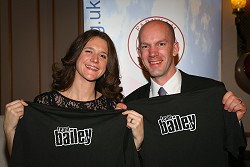 Susie Chan was commended on being chosen as Farnham Senior Sports person of the year, while the whole Frogle team that ran in relay from John O’Groats to Land’s End and who took the Farnham Sports team trophy, received huge congratulations (see first photo at top of page).

Richard Sheppard went on to commend members who contributed to the success of the local Alice Holt parkrun and announced that from 2001-2016 Farnham Runners had raised a fantastic total of £207,000 in marathon sponsorship.

Then came the much anticipated “Alternative Awards” featuring Max Fulham a local and talented ventriloquist, accompanied by his puppets “Eugene”, and “Carole”.

The evening concluded with dancing to an inspiring selection of music provided by a local DJ.