Conditions were ideal for the Farnham Runners Club Championship and fifty seven members tackled the challenging 10km race, while nine of the Absolute Beginners of Class 2017 completed the 5km distance. Everything was expertly organised in advance by race director Craig Tate-Grimes, with Richard Sheppard taking over on the night. The timing and results were co-ordinated by Kathy Brown and a post-race Hog Roast was organised by social secretary, Georgi Robinson-Welch. Chairman Jacquie Browne ensured everything ran smoothly.

Whatever their pace all competitors were keen to put up a good showing when pitted against their team mates, with the overall and age-group trophies a major goal for some.

There were no surprises that Richard Lovejoy strode round unchallenged after the first two seconds to take victory in 34 minutes 37 seconds. This is the third fastest in the club’s history, the two faster times both set by Richard Ferris-Khan, his 33:52 in the inaugural 1991championship still a record. Though Richard Lovejoy is now a second claim member of Farnham Runners he has taken part in three races for the club during last season and so qualified for the overall men’s and senior men’s trophies.

Next James Warren was a comfortable winner of the M40 shield in an excellent time of 36:49. He held off James Clarke in the senior men’s category who recorded 37:05. Not far back M40 Andrew Ellison gave his all to the finish for 37:19.

Again there was no doubt who would be the overall ladies’ winner. For the seventh consecutive year Sarah Hill had no opposition as she finished fifth overall in 37:36, also taking first F35 slot.

A battle between Charles Ashby (41:24) and Colin Addison (41:29) for the M50 honours saw Ashby the winner as he fought off injury to stride across the Bourne Green just five seconds ahead. Alistair Hardaway was third M50 in 42:45.

After a spirited finish, a surprise second across the line for the ladies was Vicki Clarke (43:52), now a second claim club member who had run two races for the club in the previous year, but not three and therefore not eligible for the senior ladies trophy. This went to Kayleigh Copeland who was just three seconds behind (43:55). 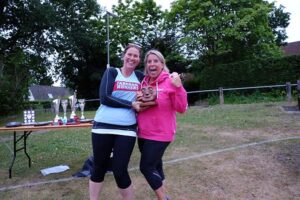 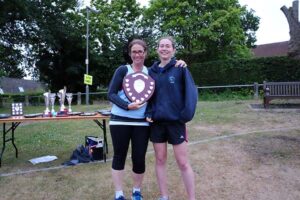 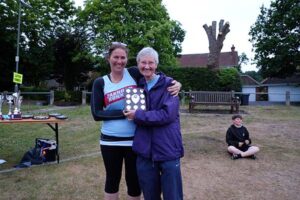 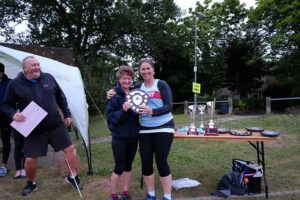 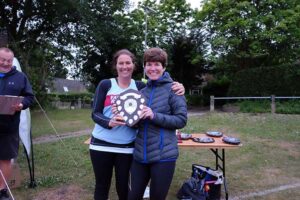 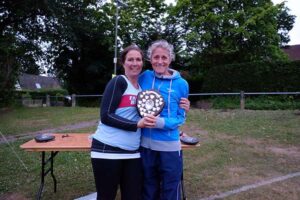 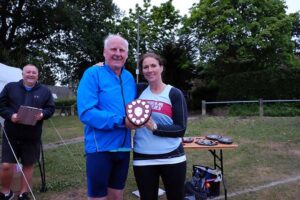 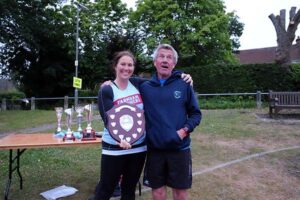 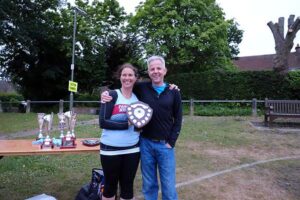 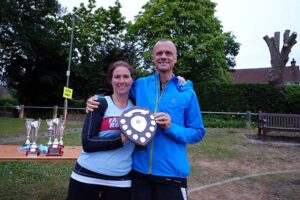 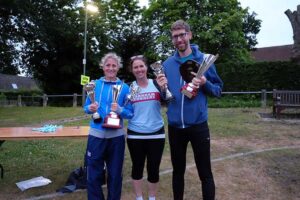 Absolute Beginners 5K and other awards

Before presenting the 10k trophies, chairman Jacquie Browne thanked Craig Tate-Grimes, Richard Sheppard, Kathy Brown and all those who made the evening a success, including Georgi Robinson-Welch who had also organised the popular “Bake Off”.