Home » All press releases » 2017 London Marathon and other marathons

2017 London Marathon and other marathons 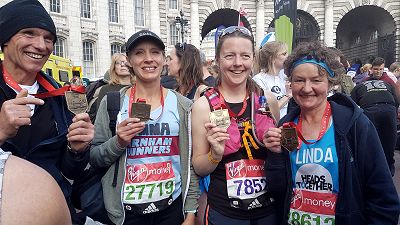 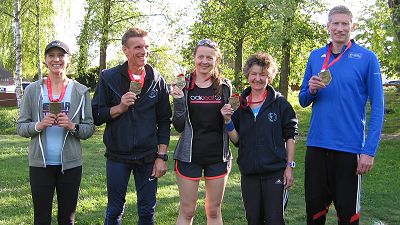 Twelve jubilant Farnham Runners arrived back in Farnham after finishing the gruelling London Marathon. Between them they raised £16,000 for charities, with Sarah McCulloch exceeding the highest previous individual total with a fantastic £10,800. Six of the ladies from the club either ran their first marathon or set a new personal best time, while Susie Chan was an official “Runners World” pacer for the four-hour target, just a week after completing the tough six day Marathon des Sables.

Their exploits added to a notable year with a variety of different marathons completed by members since January, from Brighton to Manchester, from Seville to Limassol, from Boston to Tokyo, while a growing number of members have competed in ultra-marathons.

In London they were spurred along by a very supportive and enthusiastic band of club supporters who were armed with the Farnham Runners flag and even provided much appreciated refreshments after the race. Many commented afterwards on how support from other club members had helped them during their training as well as during the race. Conditions were pleasant, sunny and good for running, with temperatures not too high.

First back for Farnham was Jason East in 3 hours 14 minutes 37 seconds, who, after injuries and lack of training, was delighted to achieve a time good enough for a guaranteed place for next year. Next Emma Pearson, with a target of 3:30, can be proud of taking almost 6 minutes from her previous best in 3:24:59. Charlie Hill-Venning clocked 3:25:26. Shaun Marsden did an excellent job of pacing for sub 3:30, finishing in 3:29:15 and helping BBC broadcaster Sophie Raworth to a new PB. Alistair Hardaway ran 3:31:11 to raise £1,300 for the Phyllis Tuckwell Hospice.

In her tenth London Marathon, Linda Tyler improved her time by almost a minute for 3:37:30 and £800 of sponsorship for the official London Marathon charity this year, Heads Together. Raising £2,000 for Cancer Research, Vicki Clarke ran an excellent 3:43:58 on her debut. Susie Chan was spot on with her pacing, crossing the line in 3:59:30. Hallam Foster was another first timer recording 4:05:03, sponsored to the tune of £2,000 for Treloar’s. Not far behind was Sarah McCulloch in a debut 4:08:08. Her £10,800 sponsorship will go to Breast Cancer Now, while Mary Denise Fitzgerald gained a PB 4:12:35. Helen Bracey was over the moon to chop 27 minutes from her previous best in 5:03:12 and to raise £1,000 for Oakleaf Enterprise.

On the same day James Musgrave, Geoff Brown and Shirley Perrett enjoyed the much smaller but well-organised Southampton Marathon, clocking 3:57:12, 4:15:27 and 5:04:33 respectively, Shirley placing third in her age category.