A highlight in the Farnham Runners’ calendar is the annual Awards Dinner to celebrate the club’s and individual achievements over the past twelve months, including being one of the local clubs “highly commended” at the Farnham Sports Awards 2017. This year eighty six members and their partners gathered at the Village Hotel, Farnborough.

The evening raised £435 for Phyllis Tuckwell Hospice from a raffle generously supported by local businesses including Bills, the Hare and Hounds, David Lloyd’s and Durham House. The raffle money was topped up by the Village Hotel, who donated 10 per cent of bar takings on top, taking the total amount raised to £600.

Chairman Jacquie Browne started the evening with a welcome thank you

“for all of you who come out rain and shine to run for the club. run for yourself and most importantly, run for each other.

And let’s not forget our long-suffering families who put up with it all.”

She went on to give particular thanks to her predecessor, Richard Sheppard who does a huge amount for the club both behind the scenes and in the foreground. “This person is a huge ambassador for the club and has supported, encouraged and mentored most of us at some time. He has been a member for over 10 years and has held many positions on the committee. He even came home with the Club Handicap in 2008 storming round the course as Spiderman.” She presented him with an engraved tankard in recognition of his service. Richard Sheppard (or “Shep”) then again excelled in the important role as MC, with Jacquie presenting the many trophies.

The prestigious Steve Parker Award for the person who has done most for the club during 2017 went to Spencer Barfield,

“someone relatively new to the club but who has been involved in many of its activities, helping with the Beginners course, serving behind the bar and generally being there when needed. However, his major contribution was when he applied his expertise to open a soup kitchen in the at the Southern Cross Country League race in the Bourne, when, under heavy fire from whatever the weather could throw at us we were able to feed 400 battle weary, muddy, cold, wet and hungry runners, marshals and spectators.”

The Chairman’s Award for an individual who has embraced the enjoyment of running, and has made tremendous personal progress this year went to Alison Mungall.

“This award is going to someone who has shown determination, resilience and complete bravery, an inspiration to us all. A complete novice, she joined the Beginners group of 2017 and despite setbacks, she joined us on our trip to take part in the Amsterdam Marathon. She decided the 8km was more suitable for her and took the tram across Amsterdam to find her way to the start line and run the race by herself.”

The unique “Smiley Award”, crafted by a former chairman, Andy Smith went to a most deserving Ali Hardaway. Jacquie continued,

“Have you ever seen this person without a smile on his face, slowly returning from what sounds like a horrendous injury with his “I’ll be back” attitude. Ali has achieved so much in the last year including embracing his role on the committee with huge amounts of energy and enthusiasm. He even appeared in National TV New Bulletins as he was snapped out running in the snow on a cold and snowy morning in shorts!”

Huge congratulations went to Craig Tate-Grimes on winning the Farnham Senior “Service to Sport” Award for his unstinting efforts in organising the Alice Holt races and all the club’s own races, as well as helping regularly with the Beginners’ classes and the Alice Holt parkrun. Jane Georghiou had picked up Farnham’s “Coach of the Year” Award for her coaching of the club’s Tuesday evening session and other tasks.

Sarah Hill won the Jane Georghiou Ladies’ Marathon Trophy for the seventh consecutive time for her 2:54: 09 in the Chester marathon, the best overall Farnham Runners time for 2017.

Stuart Williamson took the men’s Paul Charlton Memorial Trophy for his in personal best of 3:02:28 in Seville. Terry Steadman was surprised winner of the Herbie Memorial Trophy for improvement (by over two minutes) in the Alice Holt 10km between 2016 and 2017, while Jackie Wilkinson, an Absolute Beginner from 2016, took the equivalent female award, the Prince Trophy.

The Handicap Trophy went to Susan MacKenzie, another Beginner from two years ago.

The club’s Grand Prix winners (from top to 5th) were

Men’s road captain John Phillips presented the trophies to members who achieved the most personal bests in Hampshire Road League races. They were Neil Ambrose, James Clarke, Craig Tate-Grimes, Harvey Wickham all with four, while Pauline Hamilton, Emma Pearson, Anne Snelson and Linda Tyler came out top of the ladies with three.

Richard Sheppard went on to commend members who contributed to the success of the local Alice Holt parkrun and announced that from 2001-2017 Farnham Runners had raised a fantastic total of £227,000 in marathon sponsorship.

Interspersed with these wards were a number of humorous “alternative awards”, amply illustrated with suitable slides of the evidence.

After the presentations, dancing to a local DJ went on till the early hours. 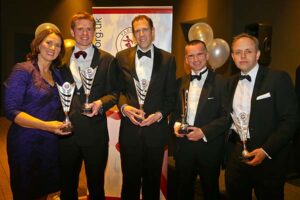 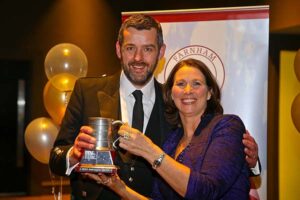 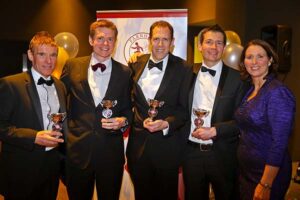 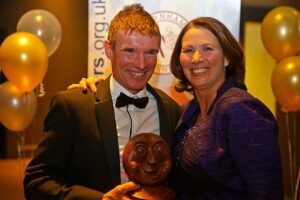 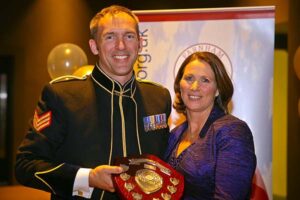 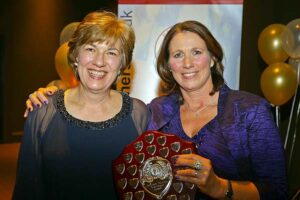 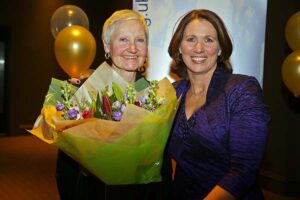 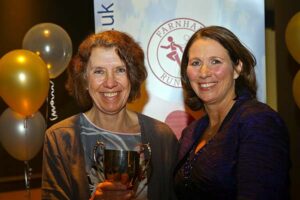 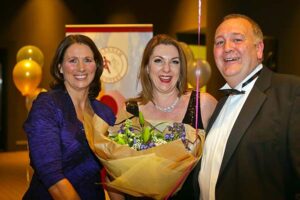