The thirty-eight members of Farnham Runners taking part in the annual fancy dress Club Handicap race donned an impressive variety of costumes. On an unchanged 4.25 mile route since 1990, the event gives all an equal chance of winning as the fastest runner was given a handicap of 21 minutes after the first runner set off. Conditions were good but care had to be taken as most of the course is on roads, from the clubhouse in the Bourne. The handicaps were calculated based on some key local races and parkruns with the help of a computer, some algorithms and a crystal ball.

Farnham Runners’ newest member, Paul Tucker was first to appear on the Bourne Green to claim the hotly contested trophy. Not far back was Emma Dawson whose steadfast training for a spring marathon is already showing dividends. Vicky Goodluck put in a strong performance for third place. Just one second behind her was Shona Ford, while the next twenty-five runners all finished within three minutes of each other, despite the difference in set-off times. Andy McCall and Kayleigh Copeland recorded the fastest times of the day.

The range of fancy dress characters was impressive, mostly fictional this year. But star of the show was “Ozzy Osbourne” (alias Nicola O’Connor) who appeared unexpectedly, arms tattooed and carrying a rat, whose head he regularly attempted to bite off, as he reportedly did in one of his shows years ago (or was it a bat in those days?). Entering into the spirit of the club by wearing a Farnham Runners headband, he won for Nicola, first prize in the fancy dress competition. 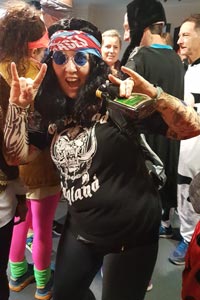 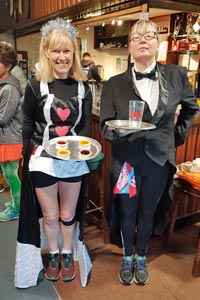 Second prize went to a smiling Queen of Hearts, aka Anne Snelson (above), complete with a tray of tarts that she carried all the way round, teaming up with butler (Kathy Brown) to help serve the post run refreshments. 118 runners, Steve and Clair Bailey jointly won third prize.

The range included a number of animals, bugs bunny, a ladybug, a black swan, and a cow. A menacing cyberman mingled with batman, superwoman, a Bollywood dancer, Ali Baba, Pirate Dandy, an Egyptian, Poppy from Trolls as well as mustard and ketchup and a salt pot.

Chairman Jacquie Browne presented the trophy to the winner and boxes of chocolates to the first three in the race and the fancy dress. Thanks were given to Craig Tate-Grimes who set out the course, Ali Hardaway, who with Linda Tyler provided refreshments and with Helen Bracey judged the fancy dress competition and took the photos. Jane Georghiou had a hand in devising the handicaps. 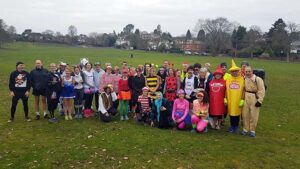 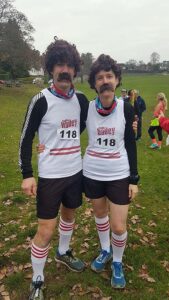 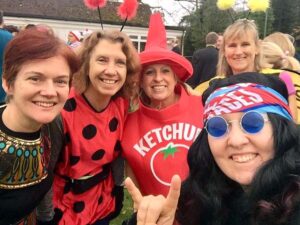 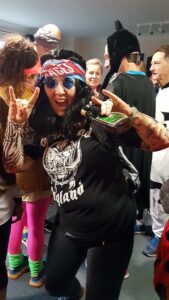 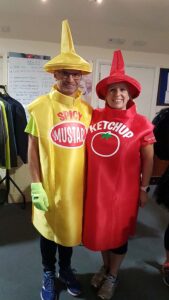 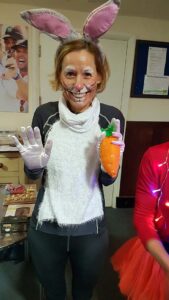 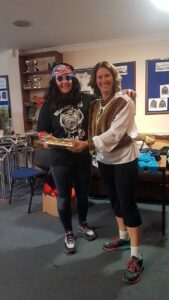