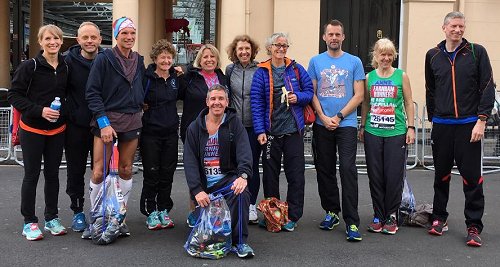 Farnham Runners before the start at Greenwich

After soaring temperatures the previous weekend, the weather was ideal for the 39th London Marathon. Thirteen Farnham Runners put all their training to good use to record some impressive times, enjoy the day and collect a huge amount for a variety of charities in sponsorship. They were cheered on by a very enthusiastic number of fellow club members, relatives and friends. 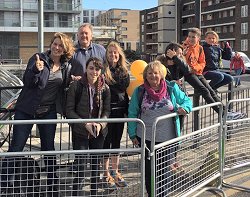 Scout leader Matt Saker was the first Farnham Runner to cross the line, running in full Scout uniform trying to break the world record for doing so. The record stood at 2 hours, 58 mins and 44 seconds and his time was 2:54:37 but, unfortunately for Matt, another challenger surpassed his time on the day. He recorded a remarkably even pace, for the first 40km varying only between 4:01 and 4:08 minutes per km and only slowing to 4:18 for the last two km.

“I ran four Marathons in my younger days and this is my fourth since returning to running a few years ago. My training went pretty well – I managed to follow a 3 hour training plan reaching total mileage of around 60 miles/week a few weeks ago. Due to the amazing generosity of my friends and family, I’ve managed to raise over £4,000 for The Scouts Association.”

Now living in Northern Ireland, Rob Gilchrist is now a 2nd claim Farnham Runners’ member who recorded 3:03:36, while Jason East was next in 3:27:25.

Another with amazingly consistent pacing during the race, from 4:53 to 5:11 mins/km throughout, Paul Mackie was delighted with his time of 3:30:36, a new personal best by over 7 minutes.

“I have enjoyed my training for my first VLM. My training plan has consisted of daily runs, mostly on my own due to work, but have enjoyed hill and speed training with Jane Georghiou and others from Farnham Runners on Tuesday nights. I have been running between 45 and 50 miles a week. This is my 12th Marathon and I aim to run 3:30, which will be 30 mins off my first marathon in 2014. Farnham Runners is a great club to be part of and has given me the confidence in myself to run with PBs still in sight.”

Linda Tyler was over the moon to clock 3:33:45 just two weeks after completing the Boston marathon, a PB by 4 minutes. She was 24th in her age category.

It was the 13th marathon for Emma Pearson and her 6th London Marathon. She was running for Microtia UK as one of her daughter’s friends has this condition and has raised £300. An injury six weeks ago upset her training plans so she was very happy to finish in 3:39:01.

“This will be my 2nd London and 8th Marathon. After gaining the club place I was unfortunate enough to damage my left foot on the Boxing Day Beer Run on the steep descent to the bottom of the hill in the Devil’s Punch Bowl. The recovery has been slow but with lots of physio and treatment at last it seems to be nearly back to normal and have been able to train fairly well for the last 6/7 weeks.

My chosen charity this year is Parkinson’s UK. I have raised to date £1500 as my sister Julie, who was at mile 25 to cheer me on, was diagnosed with the disease nearly 3 years ago.”

He had to settle for a time of 3:49:35 but was looking forward to eating his two Easter eggs he had saved for after the race!

“This is only my second marathon and I have found increasing the training distance can lead to injury so I had to adjust my target to around 4:20. I have raised £2,000 and Macmillan Cancer Support is my chosen charity because they’re doing so much for my brother.”

Craig Tate-Grimes has raised £1,500 for The Kidney Fund as in 2016 his father in law, was diagnosed with having kidney failure. He needed a kidney transplant urgently and Craig stepped forward to donate his kidney. The operations went ahead in November 2017, all went well and his father in law has made an amazing recovery. Craig was on target for 3:50 until a bad attack of cramp at 19 miles slowed his pace to 4:29:22, still a new PB.

“Pete Strange (a Club M70 veteran like me) pointed out last year that the Good for Age M70 qualifying time for the London Marathon is anything under 5 hours.

With this in mind I entered the Brighton Marathon last spring and eventually crawled across the line in 4:54:30. I made the mistake of assuming there would be feed stations on route. There were not. However it worked and I achieved my goal of entry to this year’s VLM.

I have chosen to run for Help the Heroes in memory of my father Major Alexander Masters. As an officer in the First Gurkha Rifles he was posted to defend Singapore with the regiment early in WW2. As History shows ‘Fortress Singapore’ did not live up to expectations and quickly fell to the Japanese in 1942 in an abject surrender. Dad survived incarceration by the Japanese in the infamous Changi POW Camp but returned home a broken man.” 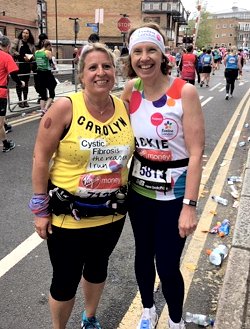 Jackie Wilkinson and Carolyn Wickham took on the distance for the first time and were both hoping to finish in under six hours, so they were pleased to record 5:39:02 and 5:56:09 respectively. Jackie raised £1,000 for Eveline Children’s Hospital and Carolyn £1,800 for Dementia Revolution and the Cystic Fibrosis Trust. 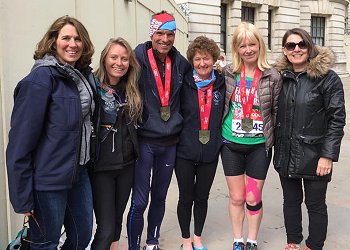 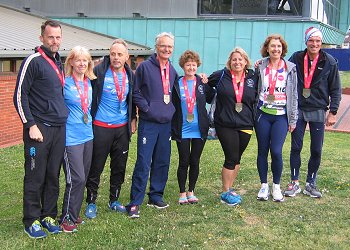