Eight teams of Farnham Runners took part in Endure 24, the “Glastonbury for Runners” festival, which takes place near Reading, over the weekend of 14-16 June.

A total four thousand individuals participate, completing consecutive laps of five miles each, amid mud, rain and sun. With Club Members running up to 80 miles each, this overnight event tests stamina and personifies running.

The weekend started well, with early risers, Spencer Barfield, Jacquie Browne, Ian Calder and John Walker securing prime spot for the Club’s 22 tents, 2 gazebos, event shelter and pit. With views of both the start and end of the course, the position enabled everyone to cheer and support Club members as they ran past. 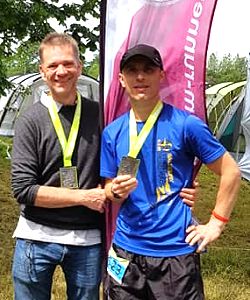 The all women “Dream Team” received prizes for coming third out of 42 (photos below), completing 32 laps, despite injury and other commitments. Louise Granell, Anne Snelson, Kate Townsend and Linda Tyler all ran 30 miles or more, with Lina Haines and Sarah McCulloch completing 10 and 20 apiece. 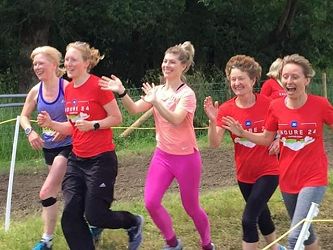 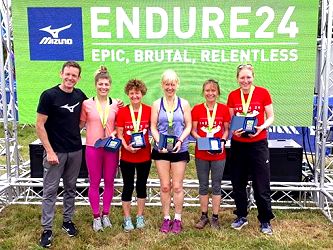 The beginners’ team from 2016, “Gandalf and the Happy Hobbits”, led by Club Chairman Jacquie Browne, continued their run of success. Members, Shereen Atkinson, Nicola O’Connor, Julia Tagg, Jackie Wilkinson and Carolyn Wickham each ran 20 miles, exceeding their 2018 achievements and coming in 25th out of 42 all women teams.

Summing up the event for everyone, top runner, Stuart Haig, says,

“The whole weekend was just great! The course and running was fab, the company first class, and my mate John was an inspiration. No complaints, no grumbles, just lots and lots of happy, muddy, tired runners doing what they love! A must for 2020!”

Anyone that runs regularly and is interested in taking part in Endure 24 next year, is welcome to join Farnham Runners at 7pm on Wednesday evenings at the Bourne Clubhouse for a trial session.