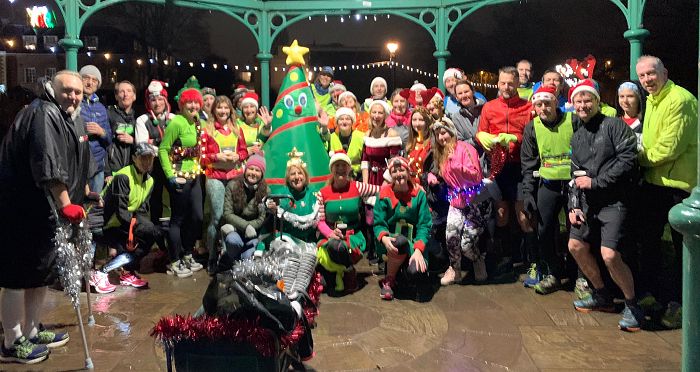 Over thirty Farnham Runners enjoyed the club’s traditional “Mince Pie Run” in Christmas fancy dress recently, despite continual heavy rain that evening. A mix of running, singing and socialising, this unique club event has been taking place for at least the last 25 years, with slight modifications now to accommodate increasing numbers.

Fortunately starting under the cover of the bandstand in Gostrey Meadow this year, cups of mulled wine were provided by the club’s social secretary and organiser of the event, Clair Bailey, before the draw for the two club London marathon places. These are awarded to those who have been dedicated team members throughout the year in league races. This year three men and two ladies had completed at least twelve league events. The names pulled out of the hat were Jane Probett, who until the beginning of last year had never run and completed her first race with the club just over one year ago, and Neil Ambrose, who started running with the club as an “Absolute Beginner” in 2013. Both were delighted but aware of the rigorous training that will be needed.

The group set off through Bishop’s Meadow for mince pies and more mulled wine (or soft drinks!) at a pub in Wrecclesham. Then they jogged to Bourne Wood Manor Care Home, where they were given a warm welcome and sang a range of Christmas carols with many of the residents joining in. After more refreshments there the group adjourned to a local hostelry for the final social part of the evening. And it was still raining.