On Saturday 18th May, Centurion (the Ultra Marathon Race Organisers) started their 9th edition of the race that starts at the North Downs Way trail head near the traffic lights at Hickleys Corner in Farnham. 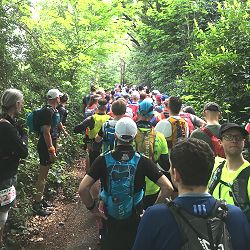 The course traverses the ancient trail across Surrey and finishes 50 miles later in Knockholt Pound in Kent.

There were two Farnham Runners, James Warren and John Phillips in the field of 252 starters. 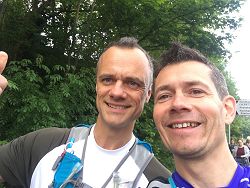 The race started at 8am in nice dry, cool conditions.

“Doing my first Ultra, I set off at a slow, steady pace, trying to steel myself for a long day of running. The furthest I’d gone (ever and) in training was 27 miles, so I would be heading into unknown territory in more than one sense later on.”

The trail goes from Farnham, The Sands, Puttenham and across to Guildford. Then St. Martha’s Hill is the first major ascent you come across on the route, the first of many before you reach Newland’s Corner.

“At this stage of the race, I felt strong, the weather was lovely for running and I was really enjoying the camaraderie with the other runners. In long distance races like this, the participants take time to chat and while away the miles together.”

The route then takes you across Ranmore Common, down through the beautiful Denbies Wine Estate and to Box Hill. This is the steepest part of the course. It’s not really possible (or desirable) to run up these!

“On the top of Box Hill I met my wife and children, I paused to give them all sweaty hugs and kisses and to take a little breather, have a little chat about the experience so far and then headed onto the 2nd half of the course. It’s the more challenging half with several brutal hills, Reigate Hill, Botley Hill to name a few of the more challenging ones, but there’s steep steps, wiggly turning, tree rooted paths throughout. You really have to have your wits about you because as you get more tired the chances of missing your footing increases.

On the way up the never-ending Reigate Hill, cramp started to set-in and I still had 20 miles to go! All I could think about was getting to the next aid station at the top of the hill where I knew my Mum had some pickle juice (a cramp cure) waiting for me.

Pickle juice in normal circumstances is pretty disgusting, but I knew it would ease my cramp, so I downed a few large gulps and was on my way again.”

Meanwhile, towards the front of the field James Warren was also suffering from cramp. He had maintained a strong consistent pace throughout the race, but as he ascended Botley Hill towards the last aid station at 43 miles his ‘magic cramp cure’ of apple cider vinegar was needed. Once downed, James was able to get back into his rhythm again. He finished the course in an incredibly fast 7 hours 59 mins, completing his 3rd North Downs Way 50 in 14th place. He is now in 4th place overall on the Centurion 50 miles annual Grand Slam.

Further back down the field and still on the course, John was still battling away.

“When I got to the 40 miles mark, I started thinking about the 10 miles count down to the finish. Every mile felt like it was taking longer, I told myself to keep drinking, keep hydrated. I was seriously fatigued by the time I climbed up Botley Hill to the final aid station – but the next stop was the finishing line!

“At the 45 miles point, I approached a field full of cows who were blocking the path. Another runner, a lady was hiding behind a tree and looked pleadingly at me, she didn’t know how to navigate around the cows, she was afraid. I walked purposely towards the cows and fortunately they scattered and moved out of the way!

“My watch eventually read 50 miles and I could see the finishing line in an adjacent field. But the path led away from it! My poor legs were desperate to stop, but the course looped around the field into a lane and only another mile later was I directed towards the finishing line. Joy oh joy, I could stop running! I was across the line in 9 hours 20 mins in 59th place. James was there cheering with everyone else, arms extended for a big cuddle!”

”It was another great day out on a beautiful trail perfectly marked by the Centurion team. 50 miles might sound like a long way, but if anybody is tempted to try what is really a long distance all day picnic, I can’t recommend the North Downs Way 50 highly enough. I’m looking forward to two more 50m races this autumn and I know John, after a great debut, is already plotting his next ultra….once the ultra bug gets a hold of you it’s hard to resist.”