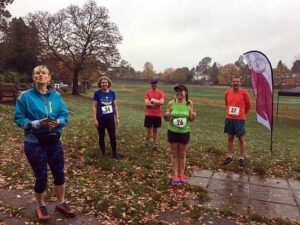 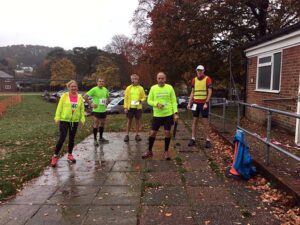 Showing just how important and popular the Farnham Runners club championship is to members, forty-seven took part in the 2020 event early on Sunday morning, just in time before the second “lockdown”.

Although it was run over the same traditional route of almost 10km, it was a very different event from normal, which, since its inauguration in 1991, has always been held in June.

This time it had to be held according to Covid-19 secure guidelines from England Athletics. There could be no gathering or group photo beforehand as the start had to be staggered, and there could be no presentations or BBQ afterwards.

Predetermined groups of six of mixed paces set off at five minute intervals.

Race director, Craig Tate-Grimes had put a great deal of work in to organising the race under the new conditions to keep everyone safe and had marked out the course so clearly no-one could get lost! 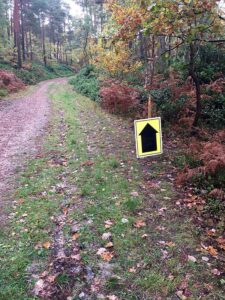 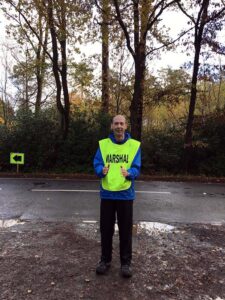 He had arranged for a few marshals to be positioned around the course, but there could be no water station. A key player was timekeeper, Kathy Brown. The runners were very grateful to all the helpers for giving up their time so that the event could go ahead.

The route is challenging, mostly on undulating roads, with a steep up and down foray into the woods before a gentle incline and final dash to the finish on Bourne Green.

The usual trophies were up for grabs:

James Clarke and Sarah Hill were overall men’s and ladies’ winners, James for the third time and Sarah for the11th time. James, first senior man, clocked 36:32 and Sarah was sixth overall and first F45 in 41:20.

In their first attempts at the challenging route, newcomer Amie took the U23 ladies’ trophy in 54:39, while Gill Iffland won the F35 category in 54:20.

Sarah Hill put in an amazing performance as third lady and eighth finisher overall in the recent Atlantic Coastal Challenge, organised by votwoevents. The route starts near Padstow and finishes at Land’s End and involves covering up to 78.6 miles (3 marathons) over three days.

“It was such an extremely memorable event, the hardest I have ever completed. The South West coastal path should not be named a path in between St Ives and Pendeen. I have never run anything so hard and technical. I loved it.”

She had taken just 15 hours 6 minutes and 17 seconds to complete the whole route.

John Phillips was delighted to complete his second 50 miles race – The South Downs Way 50, organised by Centurion Running. He clocked 9:08:43 and placed 72nd.

Over 300 began the race, setting off between 6:00 and 8:30am. With the freedom of a rolling start, John started just before 7am to give himself the best chance of finishing the event in the daylight.

The next day he commented:

“It was a bit windy and rainy at times, but there were always lovely views and good camaraderie with the other Ultra runners and volunteers. The day before I was having some serious doubts that I’d be able to finish, but once I got started it went fine. In fact it was a personal best! My legs are still battered and stiff, but hopefully no long lasting effects.”

Nik Darlington describes the Maverick Jurassic Coast trail race, in which he came an excellent second in the 20K distance with a time of 1:21:44.

“The scenes were almost unbelievable. Perfect weather, views for miles, and I’ll never forget that stretch along Nine Barrow Down towards Corfe Castle.”