Home » All press releases » A year on, it’s very different – but still fun

A year on, it’s very different – but still fun 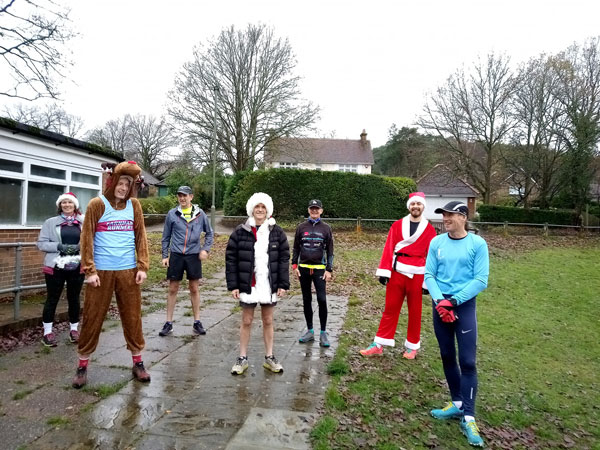 One Sunday last December (2019) over 450 runners from clubs across Hampshire and South West Surrey took part in the Southern Cross-Country League race, hosted as usual by Farnham Runners. Around 200 lunches were provided by the club, for this convivial event.

Sadly this year of course, like the club’s fancy dress carol singing “mince pie run”, it could not take place. Instead, social secretary, Clair Bailey organised a fancy dress run for Farnham Runners’ members to run in socially distanced groups around a favourite 5 mile course. 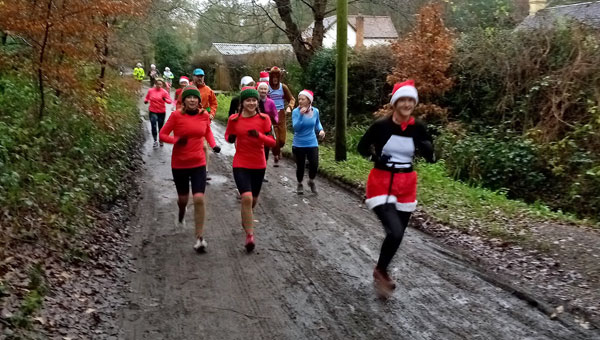 There were prizes of mulled wine for the 3 who won the fancy dress competition. First prize went to David Roy for his reindeer costume, joint second prize to mother and daughter, Julia and Amie Jones for their Christmas attire and third prize to Clair Bailey for her penguin outfit. 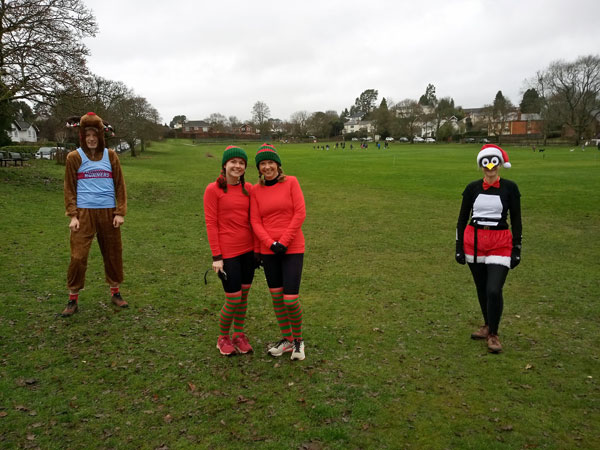 Mince pies, as well as flapjack made by Linda Tyler and parkin made by Colin Addison, were put out for the runners before they had to make their way home.

Even the dogs, Thatcher, Darcey and Ozzy were socially distanced! 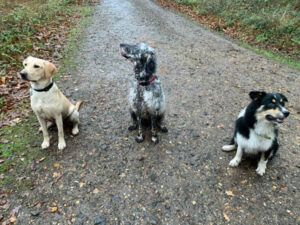 The Hampshire Road League races have also been put on hold, so after a suggestion by member Chris Cramp, the club is organising its own series of virtual races, with a nine day window for completion around the dates of the normal races.

Members can choose their own courses, on or off road, the only criterion being that it should be safe both for them and others.

The first of these was the virtual Victory 5. Thirty-seven members took part, an increase of 13 on the number in the actual race in 2019.

There was a whole spread of times as the race appealed to strong competitors and more leisurely runners alike. Some found flat road routes while others enjoyed more scenic, hilly courses. Some had not raced the 5 mile distance before.

The fastest three were very close in time: Hamish Maclean in 28:03, James Clarke in 28:22 and Nik Darlington in 28:57. Nik has recently come 9th out of 840 runners in the virtual Kendal Mountain Festival 10K, arranged by Maverick, and reported:

Fastest lady was Gabriella Hitchcock in 32:53, followed by Becky Starbuck in 37:43 and Sue Taylor in 40:41. Catherine Timson was next in 40:52, with Billy McCulloch and Linda Tyler running together and recording 41:40 and 41:47 respectively.

All the times have been used for a “Not Grand Prix” league similar the club’s normal Grand Prix. Those with a personal best time are awarded tow bonus points.

“Virtual races for Farnham Runners members are planned to substitute for the real Hampshire Road Race League races until they are able to resume.”

‘Get Me Started’ course 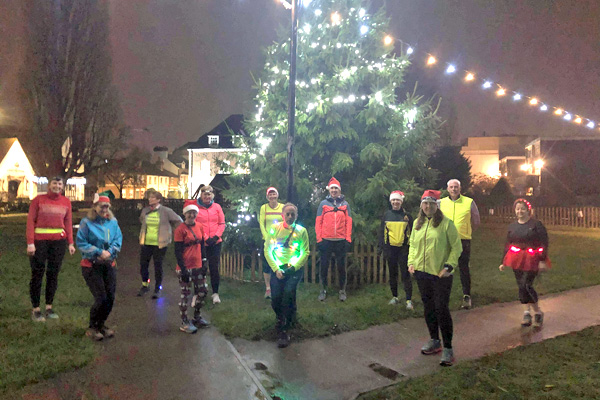 The Farnham Runners “Get Me Started” group have now completed their course, suitably dressed for Christmas and finishing by the tree in Gostrey Meadow. Coach Linda Tyler thanked Craig Tate-Grimes, Julia Tagg, Jacquie Browne, Lindsay Bamford and Ali Hardaway for all their help, especially during the last lockdown. She said,

“Good luck everyone as you now begin your running journey with Farnham Runners” Rosetta Izzo replied “I’ve loved this course so much. Such brilliant FR coaches, a lovely group of people and something to focus on in these crazy times. Thank you all for making it fun.” 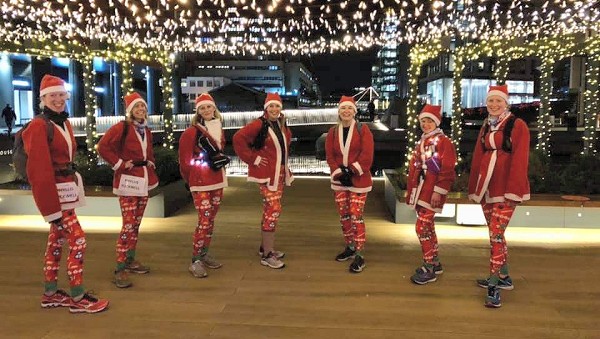 A group of ten ladies from Farnham Runners signed up for a 10K guided tour of the Christmas lights in London which took place on Saturday 11th December.

Realising that it was the same weekend as the Phyllis Tuckwell Hospice virtual Santa Run, they combined the two and raised much needed funds for the charity.

The tour gave a fascinating insight into the origins of the spectacular lights decorating the streets of London, from Trafalgar Square all the way to Paddington.

In the end only seven of the original ten were able to take part in the tour, but everyone contributed to the fundraising which so far has reached £400.