Home » All press releases » Farnham Runners – Then and Now

Farnham Runners – Then and Now

Farnham Runners team at the Farnham Half Marathon in 1986

Mick, who went on to become a renowned coach, suggested it would be a waste of time if the group were to disband after the race and Farnham Runners were formally inaugurated at a meeting in the Liberal Club in the autumn of 1985. The first elected officers were Phil Frost, Chairman; Brian Steward, Secretary and John de Moraes, Treasurer.

In the first days the club venue alternated between the Eldon Hotel and Farnham Sports Centre but, with some of the key players working for the Fire Brigade, it quickly began to have social events at the Fire Station. Soon after, it moved permanently to the Bourne Green pavilion, an ideal base for running in the Bourne Woods and further afield. Allan Bird became the first “Routemaster” and his wife Sue won the competition to design the club’s logo that is still used today. The colours adopted were Farnham’s magenta and sky blue.

Some of the founder and early members have been given honorary status for their dedicated service, while Brian Grieg went on to become a founder member of Farnham Sports Council.

During 1986 membership grew to 32 and the club became affiliated to the AAA (Amateur Athletics Association). In the early days the turn-out to races was terrific with often 50% of membership competing, virtually all of them in club vest and shorts. By 1999 there were 60 members and numbers continued to increase, almost doubling between 2005 and 2013 when the club first welcomed its 200th member.

After its inception, the club soon joined the local cross-country league known as “Today’s Runner”. At the time this consisted of just six other clubs. Farnham Runners hosted its first race in January 1988 with Farnham Runners winning both men’s and ladies sections and Gary Horne finishing first. The club won the league in 1988 and 1989 and travelled to Nottingham and Luton for the National finals.

The local league, now called the Southern Cross Country League, continues to be very popular indeed and has grown to include 24 clubs. Farnham Runners hosts one of the six races and has done so every year since 1988, an incredible record. Last season current race director, Craig Tate-Grimes even spearheaded a second Farnham race at Alice Holt Forest, with help from other clubs, so that there could be the full number of six events.

Farnham Runners has continued to place high in the league, winning in 2009, 2010 and 2012 and travelling to Halifax and Burton-on-Trent for finals. In the 2019-20 season they placed third. Though the very fastest runners are excluded from this league it welcomes all other standards of runner. The convivial atmosphere is boosted by most runners staying to share a lunch after the race, when they are keen to discuss the challenging terrain and severity of the mud!

From 1989 the club’s men took part in the Hampshire Cross-Country League, and in 1998 the ladies started to join them on Saturday afternoons at the 5 races per year, some at distant locations.

After the demise of the Farnham Half Marathon in 1993, partly due to Sunday trading and lack of availability of the Hart car park, Richard Whittet was keen to raise the profile of the club by organising its own annual race and so the first Alice Holt 10km took place in September 1994. Richard was aided by Sarah Katzler and an enthusiastic race committee. It attracted nearly 400 runners from all over the South of England and club members turned out in droves to marshal, take entries, record times and produce results.

Alan Macland took over as lead organiser of a very hard working committee, followed by Maxine Millichip and then for a few years the men’s captain, Andy Smith. This was before chip timing and when entries were sent in by post and had to be typed up. In 2003 Charles Ashby organised the event for nine years and he added a 5km race and 3km and 1km runs for juniors as well as an Under 5’s Dash. The use of a chip timing company eventually made entries and timing easier. Andrew Ellison took over as race director twice and for the past six years the important role has taken on by Craig Tate-Grimes.

The traditions of the club that were set up as result of the enthusiasm and ideas of the early members, some of them unique to Farnham Runners, are just as popular today.

Herbie Herbert produced the first edition of the club newsletter, “Footnotes” in 1986, which was a quarterly publication for a while, while “Footprints” became the monthly summary of events and news it is today.

The first Club Championship was held in 1991, starting and finishing at the Bourne pavilion. Richard Ferris, who still holds the Championship club record as well as for the marathon, half marathon, 10m and 10km distances won this first event. Still staged over the same course and always on the last Wednesday in June, there is now an increasing number of age group trophies to be won and afterwards runners enjoy a well-deserved BBQ or similar. 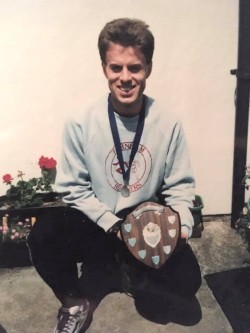 The first Club Handicap race was held in December 1985, and soon fancy dress became de rigueur. In 1987 twenty-six took part and five years later 1992 forty-two, illustrating how these early events attracted a huge proportion of the membership. It is still a very popular event in the club calendar, with fifty-three running the 2019 event, all in fancy dress. “Mystic Meg”, works out the handicaps, assisted by her crystal ball and a devious set of algorithms.

By 1994 the Mince Pie run was in full swing, with Andy Smith working out a run route for a Wednesday before Christmas that visited six members’ houses. At each one a carol was sung and mince pies eaten, along with mulled wine drunk. The singing always improved as the evening went on, as it does today! As numbers have grown, the present social secretary, Clair Bailey, sorts out pre-arranged pub visits and a final venue at a care home, to sing to the residents.

Perhaps unique to Farnham Runners are the monthly “club suppers” prepared by volunteers and served after the Wednesday runs at the clubhouse. These are very popular social gatherings, sometimes incorporating a talk or quiz. Some months a pub meet is arranged instead, giving the opportunity for runs from different venues.

The inaugural year for the club’s Grand Prix league was 1994, a successful initiative from the start, everyone anxious to monitor their place in the table. With trophies at the end of the year for the top three men and ladies, the tables are designed to encourage participation in the league races while the club’s London Marathon places go to those who have completed most events and so accessible for all standards.

Anniversary Dinners were held each November but soon the clubhouse became too small so village halls were used and each event had a fancy dress theme. In 2006 it was decided to go for a more formal Awards Dinner Dance in January and this continues today with an increasing range of trophies presented for the previous year.

A club website was set up by Steve Parker, now administered by David Georghiou for many years. This is where potential new members and existing members find out the information they need.

Since the early days the club has had race reports published by the Farnham Herald, initially these were hand written and delivered to the Herald office!

Speed sessions now take place one evening a week, since 2000 at All Hallows School in the summer months and nearby roads in the winter, led by qualified UKA coaches, Jane Georghiou and Linda Tyler.

Beginners are catered for with an annual course led by qualified “Leaders in Running Fitness” currently spearheaded by Helen Bracey. Many of these “beginners”, people who were not runners at all, have gone on to make a very positive contribution to the club’s league race results and some have even ended up running marathons!

As the club looks back over its 35 year history it is hoped it still achieves its objective of mixing the social and fun side of the sport while improving fitness and performance at all sorts of distances and levels.

Members hope to resume their normal schedule of runs, races and social events as soon as possible once the corona virus restrictions are lifted.