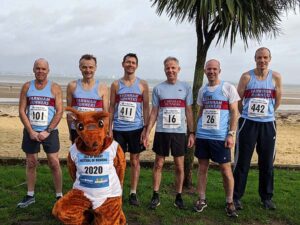 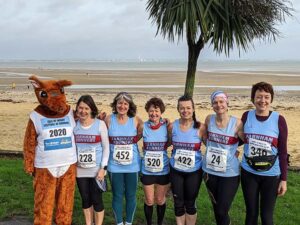 Fourteen Farnham Runners made the annual oversees trip – to the Ryde ten miler on the Isle of Wight. Known for its chilly conditions, this year was an exception as it was warm enough for some runners to choose to wear just vest and shorts. The wind was strong and the new course is hillier than the previous ones, both factors affecting times.

The men’s A team finished sixth on the day in the top flight and lie sixth after four of the season’s twelve events, so they made a very useful contribution to the club’s final placing. The ladies A team now lies ninth of ten teams in division one but have hopes of avoiding relegation. There were two prize-winners from the club as well as some top ten category positions.

Linda Tyler was delighted to lead in the Farnham ladies as 1st F55 and 25th lady in 1:19:49. Next was Penny Schnabel with an impressive 1:38:17 in her first Hampshire Road Race League race and her first 10 miler, finishing 4th in the F60 category. Clair Bailey completed the A team in 1:39:46. 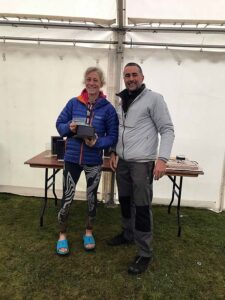 s 66 miles over the North Downs Way, starting in The Sands near Farnham and returning on the same route after an overnight stop in Redhill. It is nearly all off road and involves a total ascent of 2374 meters.

Sarah put in a stunning performance, finishing third overall, only just over one minute behind the second man. Her time was an incredible 10 hours 5 minutes 55 seconds, 36 minutes ahead of the second lady.

Stephen Elliott-Nicholls also achieved an excellent result, finishing 10th of 190 finishers in a time of 10:54:06.