Pilgrim Marathon and Half Marathon

Farnham Runners’ members were delighted to take part in the Farnham Pilgrim Marathon or Half marathon, for most of them their first race since the 1st March. All taking place according to strict Covid-19 secure guidelines, it was a superbly organised event by the Rotary Club of Farnham Weyside. Start times were from 7am to 11:35 am and, with runners of all standards taking part, runners were very grateful to the marshals who had a very long day.

Farnham Runners were also encouraged by their own enthusiastic support groups along the way, with extra sustenance on offer, particularly useful on the gruelling marathon course. The warm sunny day gave spectacular views around the hilly route, but added to the challenge for the participants.

With only “virtual” races and parkruns to motivate them, this event was a valuable target over the summer. Since June, the Farnham Runners club has continued to provide a schedule of Tuesday speed sessions and Wednesday runs according to Covid-19 secure guidelines and this, as well as individual running, helped members achieve some excellent results.

Sixteen Farnham Runners took part in the full marathon. Ladies’ winner for a number of years, Sarah Hill, though saving her legs for an Ultra race next Saturday, was second fastest lady in an enviable time of 3:36:55. She was 11th fastest overall among the 200 entrants. Third fastest lady, Emma Pearson was delighted with her time of 3:43:07.

New member Lee Goldup was next fastest finisher for the club with a time of 3:46:59. A beaming Eloise Stradling, in her second marathon, recorded the fastest time in the 17-29 category in 4:01:03. John Phillips, fuelled by his own roasted and salted potatoes, was rewarded with a time of 4:14 10, with Phil Hames in 4:25:20.

Stephen Tarrant clocked 4:27:30, while Linda Tyler was delighted to be fastest in her F60 age group in 4:29:56, an excellent time over the challenging route. Ali Hardaway settled for 4:37:30. Sue Taylor who, after just few of the long training runs of other Farnham Runners, was very pleased to complete her first marathon in 4:39:43. Emma Dawson recovered from a tumble to clock 4:44:56.

Billy McCulloch, running her fifth marathon in a time of 4:49:29, said it was the hottest and hardest she has done. Experienced long distance runners Ian Calder (4:49:54) and Kate Townsend (4:57:25) ducked under 5 hours. Matt Mitchell battled on after injury for 5:01:37 while Craig Tate-Grimes enjoyed the spectacular scenery and even took photos on the way round but gained his course best time of 5:01:59.

Sarah McCulloch ran for Mind, the mental health charity, as part of the Co-op “Million Pound Mile” initiative and raised £731. This increased the Farnham Runners sponsor money raised in marathons since 2000 to £248,000.

Photos from the event. Click on the gallery to browse the individual photos. 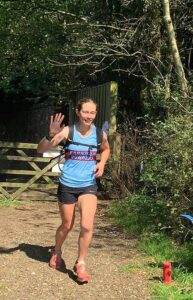 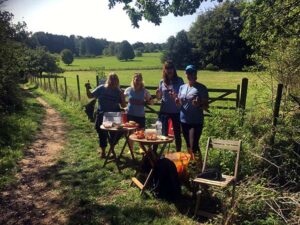 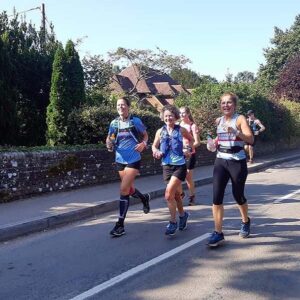 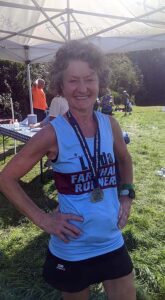 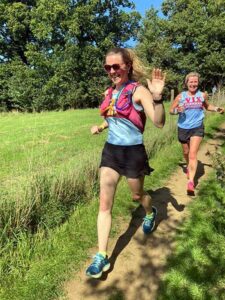 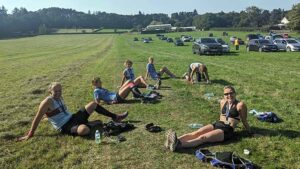 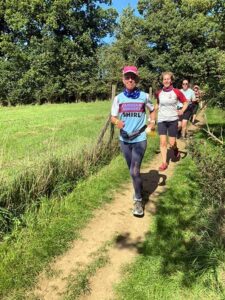 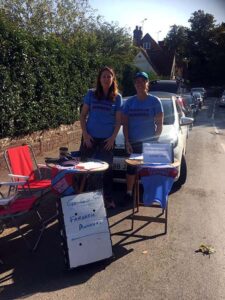 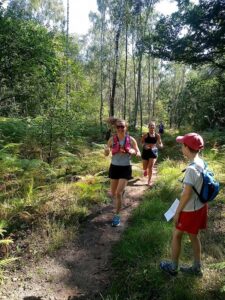 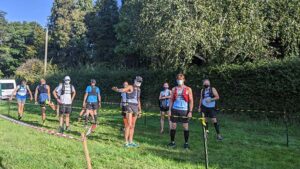 Sarah Hill was justifiably over the moon to finish the local Ultra 62km Fox Way, organised by AAT Events, in a remarkable time of 5 hours 21 mins. She was fastest lady of 43 and recorded an amazing fifth best time overall of 170 finishers. She enthused:

“This is another event that gets the thumbs up for a great route and impeccable organisation and marshals/fuel stations.”

The Fox Way is a scenic circular course devised by Richard Fox, an avid local walker who was amazed by the beautiful and varied countryside he found along the route which circumnavigates Guildford via Godalming, Shere, Clandon, Ripley, Worplesdon, and Puttenham.