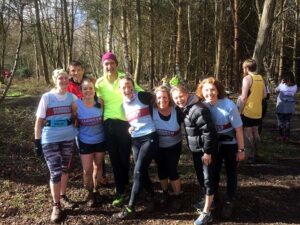 A sunny day, after all the rain, helped to make the final round of the Southern Cross-Country League enjoyable for the 375 runners who participated. Without the chance of any other sixth event, Farnham Runners race director, Craig Tate-Grimes brought to fruition his idea of a race in Alice Holt Forest. He devised the route, sought permission from Forestry England and, with helpers, laid out the course the day before.

As Farnham Runners were hosts for the third event of the series, in December last year, this was a joint venture with the 23 other clubs. Craig co-ordinated the helpers from the different clubs including Farnham Runners, to marshal, while Basingstoke and Mid Hants AC took charge of the results calculations. All clubs donated cakes and Farnham Runners provided the sandwiches for the very popular post-race refreshments. 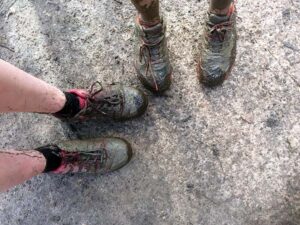 The new course certainly passed the test for a challenging cross-country with its steep ascents and descents, lots of mud after recent rain, a stream with slippery sides to cross and tree roots and low branches to negotiate. Some wide muddy sections in the first half alternated with the hard-packed gravel surface of the forest, while in the second half there were some narrower single tracks where overtaking was less of a problem once the field was more spread out.

Farnham Runners were rewarded for their efforts by coming second on the day and third in the series. Basingstoke and Mid Hants AC were series winners again, while Liss Runners, who were second after five events put out a strong team for the final and so clinched second.

The Farnham Runners men’s team placed an excellent second and the ladies fourth in this round. The men were led in by newcomer Hamish Maclean who finished an impressive 4th in his second race in club colours. The reliable James Clarke was next in 11th, while David Roy was 25th and Andy McCall 28th. There was a battle for the final scoring place between John Hill-Venning 41st and Stephen Elliott-Nicholls, 42nd in his first cross-country race for a few years.

A beaming Louise Granell recorded her best ever 3rd place for the ladies, perhaps helped by more rest to overcome a recent injury. Kayleigh Copeland made a real effort to travel to the race and made a very valuable contribution to the team in 15th. She was followed by the ever-reliable Linda Tyler, who had completed a 15 mile training run the previous day, in 26th to complete the team score.

Some had used the race as part of a longer marathon training run.