Fifteen Farnham Runners completed a marathon on the day of the Virtual London Marathon, twelve entering the event, two others running the whole 26.2 miles in support of others and one running on a treadmill. This was a very strange event because of Covid-19. The twelve were among 43,000 people from 109 countries running the event “virtually” instead of on the capital’s streets. They could choose whatever course they liked and the distance was recorded by an app that sent off their time to the official result website after completion.

After being unable to race for so long, it provided strong motivation for the runners to continue training. The conditions on the day were grim, with continual heavy rain wind and cold – the maximum temperature was 9 degrees Celsius. Even starting a marathon in the conditions required a huge amount of will power but they were spurred on by the camaraderie of others in their group.

However, one, Matt Saker avoided the harsh conditions and recorded the fastest Farnham Runners’ time. Still a herculean task, he completed the distance on a treadmill in just 3 hours 7 minutes 18 seconds. Starting at 7:40 am, he averaged 7:08 minutes per mile and so had finished before 11am! This is his story:

“Having gained an entry into the 2020 VLM I was keen to mark the day by completing a marathon.

Most of my running friends struggle to understand how I can spend so much time running on a treadmill but, while there is no substitute for getting out in the fresh air, I find treadmill running to be less stressful on the body (important when running c50 miles per week in preparation for a marathon) and preferable to running outside on those dark and cold winter days.

Given this, and based on a somewhat dodgy weather forecast, I decided to run my marathon on my treadmill.

I got up early and armed with 3 bananas, 2 energy bars, 2 bottles of water and my Stryd foot pod (expensive but highly recommended and supposedly more accurate than GPS) I fired up my treadmill and got going.

As usual I set the treadmill gradient at 1% to replicate outdoor wind resistance etc and started to slowly tick off the miles.

I’m fortunate to have a TV set up in front of my treadmill, so I switched on BBC to watch the women’s and then the men’s elite marathon races.

This provided some much needed motivation. The men were catching me up fast towards the end, but I managed to finish before them (alright I did give myself a 90 minute head start!) and completed my individual race in a very pleasing 3 hours 7 mins.”

Sarah Hill and Emma Pearson travelled to the Isle of Wight for an undulating road race and had also entered the Virtual London Marathon so recorded times in both. They put in superb performances in atrocious weather and were delighted with their results.

Sarah was second lady and first in her age category in an enviable time of 3:10:26 and she was 33rd finisher overall of 171. This time gave her 15th place in the F45 category for the Virtual London race.

Her training partner Emma gained a new personal best of 3:20:16, (by two minutes), remarkable in the conditions, against a strong wind at times. She was fourth lady and second F45 in the IOW race, and 33rd F45 in the LM. The thought of finishing spurred her on, she said.

Next fastest for the club was new member, Lee Goldup, who, with friends, planned a route mainly on canal towpaths and along the Thames, keeping roads to a minimum. He achieved a new personal best too, of 3:35:36. 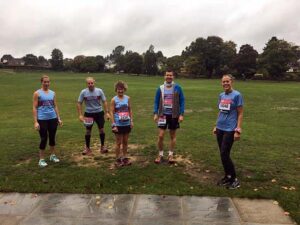 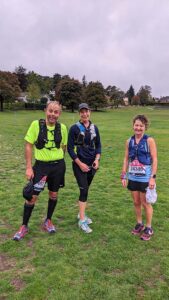 Five Farnham Runners devised an undulating mainly off road route. The three loops all started from the club at the Bourne Green. The first loop was out to Tilford, the second to Frensham Pond and the third to Moor Park and back through the town.

Running very strongly was Emma Dawson who sliced a huge chunk off her personal best in 4:07:00. John Phillips recorded 4:14:44.

Rebecca Starbuck, Craig Tate-Grimes and Linda Tyler encouraged each other round. Becky finished her second marathon in 4:53:54, followed by Craig in 4:55:43 and Linda in 4:55:49.

Colin Addison ran the whole way in support of the LM runners (4:16:26) while Jack Ferguson ran two legs and Vicky Goodluck, Keith S Marshall and Sue Taylor ran one section, all in the pouring rain to encourage their team-mates.

Neil Ambrose plotted a route of his own near his home and clocked 4:26:01, while Kate Townsend chose the undulating off road Clarendon marathon and recorded 5:10:46.

Damian Probett accompanied his wife Jane, both running their first marathon on a route around Farnborough. Taking breaks every 10km, their running time was 5:29:31 and total time 7:56 14.

Jane has raised a fantastic sum of £1145 for Dystonia UK. Dystonia is a neurological disorder that causes muscle spasms. Jane has suffered for 20 years from laryngeal dystonia which makes it hard for her to speak. She has raised awareness of the condition in the local community, including running in a mime costume in the club’s handicap race in January. She commented:

“I have made some great memories since I started running in my 50th year and love running now”.

Stephen Elliot Nicholls’ total time was 9:28:07 but he had a stint of 6 hours child care in the middle, so his actual running time was 3:31.