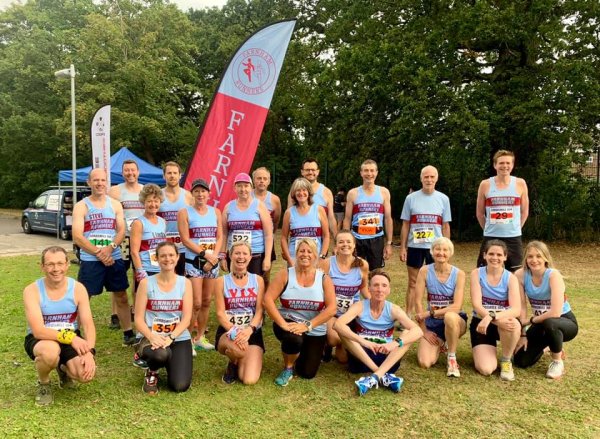 A sharp shower at the start line was unpleasant while it lasted but it soon stopped after runners were underway in the Lordshill 10km, the second event of the Hampshire Road League’s 2021-22 season.

Conditions were good for running, not too warm or windy, and twelve of the twenty-five Farnham Runners who took part gained personal best times. The course was fairly flat but with definitely more uphill in the last 5km. Runners could cheer each other as they passed on the out and back route which followed lanes and paths from Lordshill. Because of Covid-19 precautions at the start, the results used chip times, not gun times.

Farnham’s first four men all gained personal bests, the first two with impressive times of under 35 minutes. James Clarke was delighted to finish 9th overall in 34 minutes 42 seconds. Only 5 seconds back was Nik Darlington in 34:47, 10th, just a week after coming third in the Farnham Pilgrim marathon.

The still improving M 60 Keith Marshall clocked a PB of 40:10 for second place in his category, while newcomer Ivan Chunnett’s new PB is 44:01. This A team placed 4th in the top division and they lie 3rd on aggregate out of 10 teams, an excellent start to the season.

Though there was an incomplete C team, the three runners still counted and came 7th out of 20 clubs in B Division Two. They were Peter Callow in 48.20, Geoff Brown in 50.48 and Craig Tate-Grimes in 51.53. 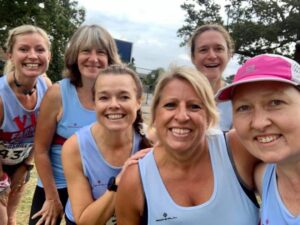 The close packing of the B team helped them to place 5th on the day in B Division One and they lie top on aggregate out of the 16 clubs in that division! A strong finish by Clair Bailey gave her a time of 52:42 (PB), followed by 2nd F65, Jane Georghiou in 53:07. Next came newcomers Bella Weetch in a PB 53:13 and Laura Quinn in 54:19, just day after a very long training run in preparation for the Manchester marathon.