With running groups restricted to a maximum of two and no races allowed, Farnham Runners’ members, have taken part in a number of virtual races. These involve running a fixed distance over a course chosen and timed by the runner.

Farnham Runners entered a full team of 8 in the competitive England Athletics Virtual Road Relay qualifying round and were pleased to come in the top 100 clubs. Mixed teams of eight (4 x men / 4 x women) were required to complete legs of five miles per runner.

Hamish Maclean in 28:27, James Clarke in 28:29 and Nik Darlington in 29:30 put in very strong performances for the club, while Chris Cramp, who encouraged the team to take part, was final men’s scorer in 36:18. Gabriella Hitchcock led the ladies’ contingent in 33:50, with Becky Starbuck in 38:47, Linda Tyler in 40:54 and Kate Townsend in 43:41.
The team placed 97th. The top 50 teams will go on to a National Round while the final will be a chance to represent England against teams from the other Home Countries.

In late 2021 ten Farnham Runners completed the virtual Salisbury 10 miles, the original event having been scheduled for March 2020. All were rewarded with the finishers’ medal and T shirt as for the normal race and the results were published on the website of the organising club, City of Salisbury A.C.

There was a high entry of 461 and Farnham Runners gained some good age category positions among their ten entries.

Finally, 42 members took part in the second of Farnham Runners’ own virtual substitute Hampshire Road League event, the ‘Not’ Stubbington Green 10km, which will give runners points in the club’s Not Grand Prix series.

Many, but not all, chose a fairly flat and fast course. A few gained personal best times. The spread of times showed that the event, which could be completed at any time over nine days, attracted the whole range of the club’s membership both in pace and age, from 34 to over 90 minutes and from age 24 to 77. 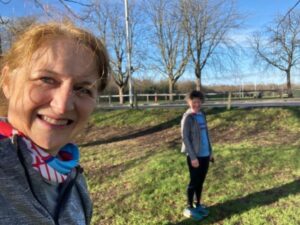 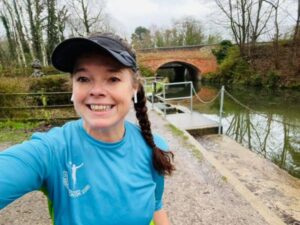 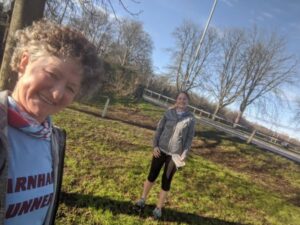 The times of the first 10 men and ladies were: