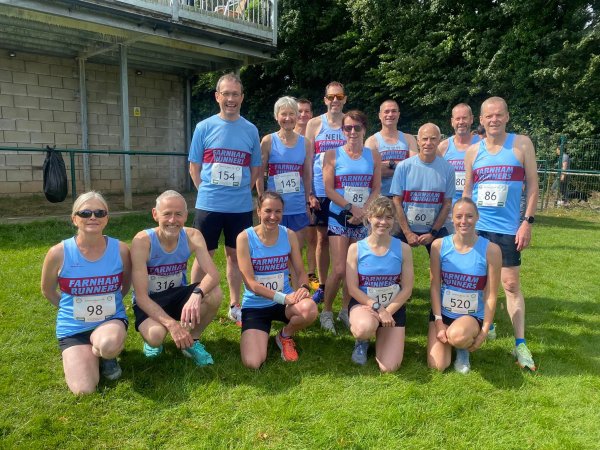 Nineteen Farnham Runners took part in the final Hampshire Road League race of the season, the Alresford 10km. This was organised by Alresford Rotary Club and they had sustainability at the forefront of their planning. They sourced the wooden finishing medals from the UK and the goodies were cookies baked by the local Arlebury Café with watercress provided by the Watercress Company. The prizes were hampers of local produce and runners were asked to car share to get to the venue if possible. Cups for the water stations on route were compostable and there were no plastic bottles at the end.

The Farnham men’s A team on the day placed 5th and the ladies A placed 3rd which gave the men 5th in the final table and the ladies 6th, both out of 10 clubs. The B team men were 9th to give a final placing of 9th out of 13 clubs and their C team was 6th to give a final 7th of 19 clubs. There weren’t enough Farnham ladies at Alresford to count for the B or C teams but only 8 races of the 10 in the series counted and the B team finished 5th of 16 clubs and the C team an excellent second of 15 clubs.

Nik Darlington is due to receive a much coveted special T shirt for completing all 10 races.

At Alresford Nik led in the A team in an enviable time of 36:08 over the scenic undulating course, part of it out and back so runners could cheer each other along. James Clarke wasn’t far behind in 36:33. Neil Ambrose was next in 40:27 while Chris Raby was a delighted final A team scorer and 2nd M60 in 42:17. 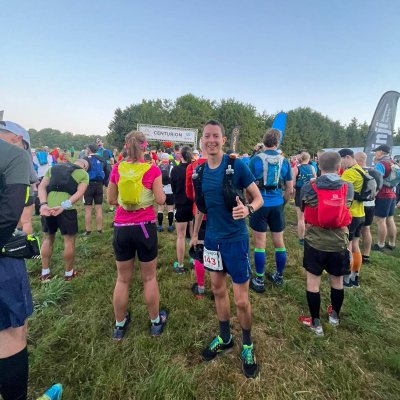 Stephen Bullough ran the South Downs Way 100 a 100 mile race over the chalk ridgeway from Winchester to Eastbourne with an excellent finishing time of 21:52:12. He came 64th of 405 who started and 103 did not finish. He writes:

“I’m thrilled to have completed the race. After dropping out at mile 87 at the Thames Path 100 last year, I was really eager to have another go and there were several differences which helped me succeed.

Firstly, a whole year of consistent training in the legs helped. I’ve worked my way up through the distances and followed a proper training programme courtesy of the coaches at Centurion Running, the company who run these events.

The weather Gods were also on our side. We avoided any rain and the 5am start meant we made the most of the sunlight. A big difference between 7am and the heavy rain of last year!

The crucial difference, however, was that my fiancé Gabriella crewed me from mile 50 and then at every possible check point until the end. The psychological boost of seeing her in the darkest moments around the 87 mile point, smiling and offering encouragement, as well as hot tea and lashings of hot sformato (an Italian dish consisting of potatoes, spinach and ricotta) was simply priceless.

There is something very pure about these long distance races which helps create a unique atmosphere. I feel really happy and lucky to have taken part.”

“It was a fantastic race. The course was off road on good track, with a few grassy sections. The hills were very tough and pretty relentless for the first 5km, but the views of the surrounding countryside were well worth it.

I had no idea I was the first lady until I was asked to remain behind for the awards. I was thrilled, not only to be first lady, but third overall. I didn’t expect to be winning any races in my forties!”

Linda Tyler chose to run over twice the 10km distance, the Denbies Half Marathon, over similar terrain. She won the F60 category in a time of 2:11:15.

Also taking on the challenge of a tough course, the lumpy Giants Head Marathon near the famous Cerne Giant, were Kate Townsend, Victoria Dick and Matthew and Catherine Wernham.

They were all rewarded with a fabulous medal and Matthew and Catherine both won their age categories. Stephen Dick came first in his age category in the Hill Race (about 12k). 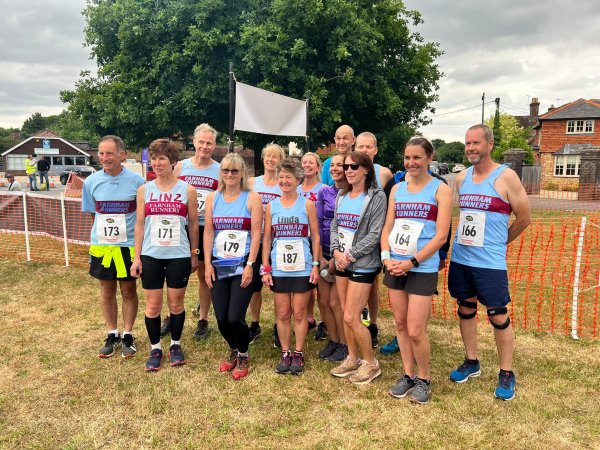 Lots of Farnham Runners also enjoyed the Elstead Marathon, a very pleasant 5.5 miles on the commons around the village, with a famous finale of a crossing of the River Wey, organised by the Elstead Scout Committee. 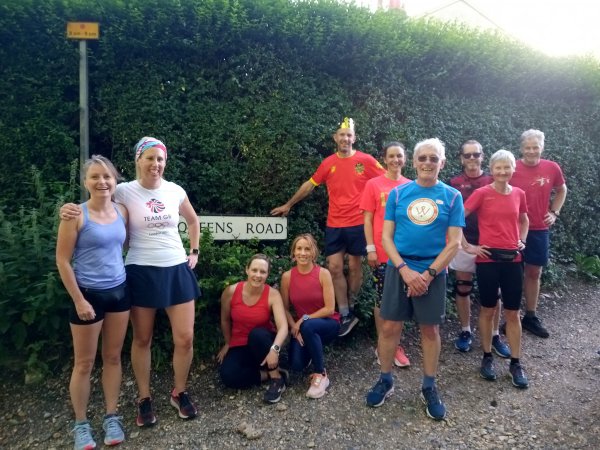 Farnham Runners celebrated the Queen’s Platinum Jubilee in unique style. It involved a run to sites in Farnham with possible royal connotations followed by very welcome cream tea in Gostrey Meadow. The whole event and route were devised by social secretary Clair Bailey and her husband Steve.

It was held on a beautiful sunny evening and took runners up through Farnham Park to Hale and back via photo stopping points that included Windsor and Balmoral Crescents.

It was so successful that one member commented that Clair should become lifetime social secretary!

Clair and Steve Bailey also organised a very enjoyable Sunday social run, using public transport to get to Alton and then running the 11 miles back along St Swithun’s Way.