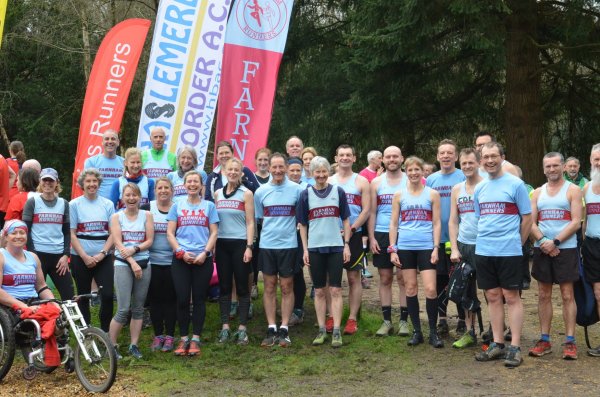 After the fourth event of the Southern League cross-countries, Farnham Runners ranked fifth of the 24 clubs going into the final race in Alice Holt Forest. They were three points adrift from the third club with four clubs within three points behind them. So, a lot was at stake on the day.

The men, with some unable to make this race, came ninth. The ladies were also missing a key player through illness, but clinched an excellent second place. This was enough for the combined team to come joint second along with two clubs above them and to move up to a very creditable fourth in the final standings.

Farnham Runners’ race director, Craig Tate-Grimes had pulled out all the stops to make this a memorable event and recent rain meant it didn’t disappoint those who enjoy lots of mud! There were a few interludes on the gravel but most was on narrower woodland tracks, with even a stream to cross.

Very little could be described as flat and the route favoured strong cross-country runners. Craig had marked hazardous tree roots and warned of at least one low branch to negotiate.

As Farnham Runners had already hosted a race this season, other clubs provided many of the helpers and volunteers needed to marshal and help. Winners Basingstoke and Mid Hants AC took on the task of sorting the results. Forestry England kindly agreed to the race taking place in the Forest.

As the last part of a 16 mile marathon training run, Nik Darlington finished a fine 15th, which gave a huge boost to the club position. Bob Brimicombe was delighted with his 55th place to count second for the club. Colin Addison came 65th, with Harvey Wickham in 77th and Justin Clarke in 79th completing the score. Ivan Chunnett in 88th, Luke Smith in 93rd and Tony Jones in his first race for the club in 97th made the top 100.

Kayleigh Copeland had an inspiring run to reach 5th, her highest place to date and Emma Pearson wasn’t far back in 7th. Giving her all was Sue Taylor in 36th to complete the score. The place for each of these ladies was critical as if one of them had been one further back Farnham Runners would not have achieved fourth place for the series. Stalwart Lindsay Bamford was next to finish in 37th. Kay Copeland in 46th just held off Jane Georghiou in 47th who had finished 4th F65 in the British Masters Cross-Country Championship at Tonbridge the previous day. Catherine Timson made the top 50 (50th). 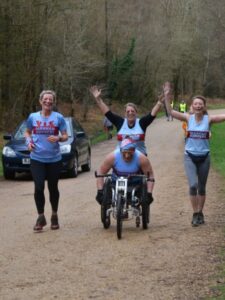 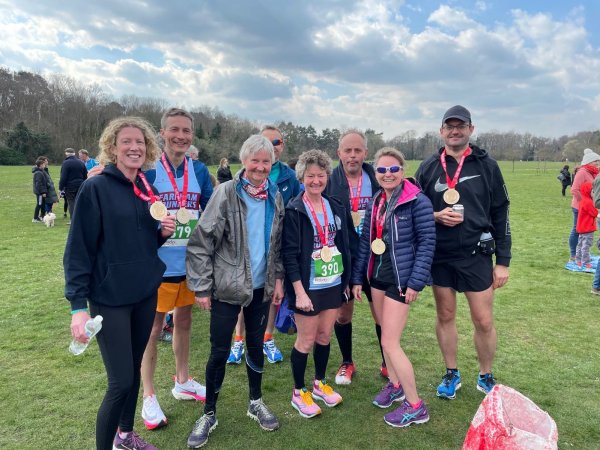 The next Sunday was the Fleet Half marathon and sixteen Farnham Runners took advantage of the very popular race on their doorstep.

It was a perfect day, sunny and an ideal temperature for running with little wind. Under the leadership of race director Penny Abbott, Fleet and Crookham AC put on a superb event. Huge numbers of marshals gave up their time and there were hundreds of enthusiastic cheering spectators.

Eight of the 17 Farnham Runners gained new personal best times, from just two seconds to a whopping 10 minutes! There were four age-group prize-winners from the club too.

Matthew Wernham joined Farnham Runners that very day and had an amazing start to his time with the club. He won the first M65 prize by an amazing 8 minutes, and chopped over 6.5 minutes from his previous best, crossing the line in 1:32:05. This is a new M65 club record by 16 minutes.

The weather was sunny again but much cooler. The scenic route wound its way along the valley of the Avon with a spectacular view over Salisbury on the way back. There were a number of undulations especially on the return, though the last couple of kilometres were fast and flat.

Nik Darlington sped round to a new PB of 56:36 that placed him an excellent sixth of the 746 finishers. His time was within striking distance of the club’s senior men’s club record, set by Richard Ferris at Alton in 1990. He wrote:

“The Salisbury 10 has to be one of the most idyllic race routes around. It has its little pinch points in terms of undulations, but it is a total fox of a course with chocolate-box villages, steep-sided vales, verdant farmland, the riverside and that framing of the cathedral spire on the horizon as you approach the end.

The ladies four-strong A team were 7th in the top division, the B team placed 7th in their table with an incomplete team of three counting as 5th for the Cs. There are just three more races to go before the final tally of the series. 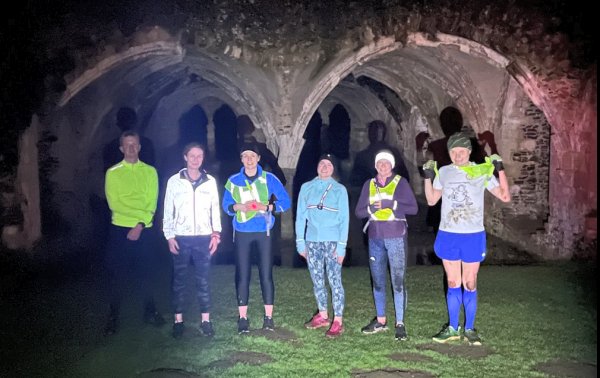 Farnham Runners are now holding a “Roving Run” once a month on Wednesday evenings instead of meeting at the club house in the Bourne every week.

The first two were “head torch runs”, the first at Caesar’s Camp, the second starting from Farnham Park and the third from Hankley Common.